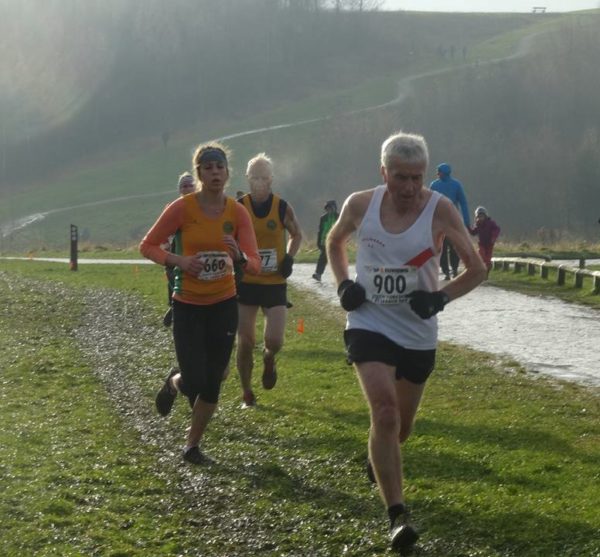 The sun finally showed its face with Megan Whitaker being tracked by Graham Hague. Note the fun descent in the background as the course plunges down the side of the tip.

Think of South Yorkshire and think of coal. Cross country in South Yorkshire has a close association with coal too with many past and present courses based around the sites of former pits. Killamarsh and Campsall immediately spring to mind whilst Grange Lane was just down the hill from Barnsley pit. Kiveton is the latest addition to the series this being the second time that we have run here.

This map show Kiveton in 1948. The landscape has changed since although the Colliery Offices, now with synthetic football pitches, are still there. To the east the Chesterfield Canal, where it once exited the collapsed Norwood Tunnel can be seen whilst the long thin fields dotted about are a relic of medieval strip farming. 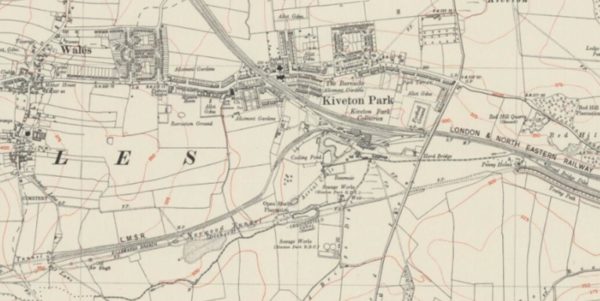 As for the race itself, the course was testing although, as they say, it was the same for everyone.With much of the route on hard packed trail, studs instead of spikes were recommended but heavy rain, on top of ice, made for treacherous conditions and the organisers did well to get the event underway. A late route change gave the men a good old fashioned bog to negotiate although this was later amended to something a little easier for the ladies and youngsters.

This event was the final league race of the season and also included the South Yorkshire Championships. There were gongs for some but kudos to all those who dared leave the comfort of the club tent as the rain lashed down. In the league, mid-table mediocrity was maintained and relegation avoided as we finished in seventh place. Sheffield Hallam University (11th) and Penistone FPR (12th) were relegated to Division Two.

With the Championships together with final Team and Individual standings for the league there are lots of results to wade through. Follow the link to the SYCAA page: SYCAA Cross Country League and Champs Results. Striders results are:

Scoring for the league placings is based on the best three results from four races. Athletes have to complete three out of four races, including the final Championship Race, to be eligible score. Six Striders (marked*) made sure that the club’s money on entry fees was well spent by making it to all four races. Silver medals in the league for Mary Craig (F65) Nick Scott (M50) and Graham Hague (M65).

Finally, 2018 will be South Yorkshire XC Secretary Pete McLeod’s last year after 20 years in the post. So, if you like hard work and grief aplenty when things don’t quite go to plan, put your hand up now. This man is a hero and he will be a tough act to follow.