The 42nd TCS Amsterdam Marathon is known for its fast and beautiful course. The start and finish take place in the historical Olympic Stadium. Every year this leaves an unforgettable impression, not least because of the presence of the supporters in the tribunes and the marathon grandstand. The Marathon course follows a part of the Olympic route along the Amstel River, past stately homes and a few windmills. This route offers beautiful rural scenery (which includes the Arena) and gives an impression of the huge amount of daily business that takes place on the Amstel.

Kenya’s Lawrence Cherono was the surprise winner of the TCS Amsterdam Marathon, taking more than a minute off his PB to set a course record of 2:05:09 with Ethiopia’s Tadelech Bekele winning the women’s race in 2:21:54, the second-fastest winning time in the history of the event and just 45 seconds shy of the course record. Of the 8 marathons Cherono has competed in he’s now won 4 and placed on the podium on the other 4.

A few words to describe the course of the marathon are: Canaals, windmullen, pannekoeken vlak, and brugs. No these words aren’t made up and provided much debate about the Dutch stereotypes’ between and my wife, as well as between me and Stuart Jones on Facebook.

Amsterdam was my second ever marathon and my first experience of a big city marathon event (over 17,000 runners on the marathon) and of a race aboard. The bulk of my training was with my 9 month old daughter in the running buggy – before you ask no I didn’t do it with the running buggy as my oldest asked or in the sling as my step mum thought we were doing.

We arrived in Amsterdam on the Saturday having travelled up from Rotterdam where we had been for a few days prior to that. After a quick trip to our hotel to drop of the luggage, we set off to the expo to pick up my race number and the finishers t-shirt. The organisation at the expo was good, with hardly any queues for the race number or the t-shirt. The only gripe I have is that people were whipping into their t-shirts straight away and on race day there were quite a few people running in their new tops.

On the day of the actual marathon, it was forecast to be a hot one (not as hot as Lisbon mind you) but hot enough. I wouldn’t have minded the previous 4 days had been ideal running conditions and the last 2 days were as well. I got to the Olympic Stadium where it started and finished with about 45 minutes to spare, dropped off my bag (this was quite an efficient service) and proceeded to the starting pens. The atmosphere in the stadium was fantastic with music playing, big screens and spectators allowed into the stand.

After waiting for 15 minutes, it was my turn to run over the start line and begin my experience. The course takes you out of the stadium and near the centre of the city. For those of you familiar with the city, the route takes you through Vondel Park (where I chatted to a bloke from Doncaster A.C who knew our very own John Bridgeman and Jorge Bronze) and spotted Kay and Catherine for the first time. It then goes through the passage underneath the Rijks Museum and then winds its way out to the business district. After this, it takes you out onto the Amstel River where you take in both river banks (where the windmills are) and then winds back into the city centre and finishes back at the stadium.

Performance wise, I felt really good going through 13 mile mark in about 1 hour and 55 mark, which put me on target for my aim of 3 hours and 50 minutes. I was really happy at this point and thinking that I could keep it up. How wrong was I! The heat started taking its toll despite regularly taking fluids on board and I developed cramp at about mile 17 which put an end to the thoughts of a PB. I decided to just enjoy the experience and atmosphere. Having decided that it gave me a chance to take it in and notice the various things going on. As well as the DJ boats, there were DJ cars playing everything from rock to dance music, live bands including brass and rock bands. The support all around the course was fantastic, with people in Duracell bunny outfits giving out high-5 and of course the spectators all way around.

I crossed the line in 4 hours and 14 minutes having struggled over the last 9 miles or so, telling myself that I only had 3 parkruns left or in the last 5k one parkrun and then as the distance ticked by how many laps I had left. The thing that kept me going was the fact that I was in danger of being overtaken by a bloke running in a suit with about 2k to go. At the time I was chatting to a bloke from Italy and walking (Colin Hardy has already told me off). I saw the bloke in the suit and said that I had to finish in front of him and for the last 2k I tried to sustain at least a quick shuffle, I am pleased to say I did beat the man in the suit and also another one dressed up as Pickachu. I also helped a man over the last 800 or so meters who had pulled up cross the line.

I would wholeheartedly recommend the marathon to anybody thinking about doing an overseas marathon in the future and I am now focussed on entering Liverpool next year.

11428 runners finished the race including the lone Strider, well done to Liam Russell

A more detailed breakdown of Liam’s time can be found here (I love this level of detail!) 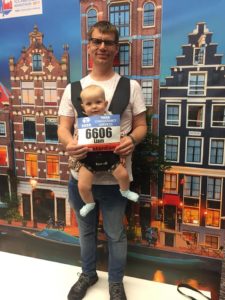