Otherwise known as The Free Cakes, hosted by Killamarsh Kestrels since 2006 this race has a reputation for being one of the best local events about in terms of challenge, scenery and post race refreshments. With temperatures touching 29°c (mid eighties in English) the weather was always going to a big issue for many competitors but this year there was also a route change which made the crossing of the busy A618 at Aughton far safer (thank you Kestrels) but added an extra mile to the course.

Starting and finishing at Rother Valley Country Park, the route is a mixture of good quality trail, footpath and road taking in a tour of Rother Valley, Treeton Dyke and Ulley Reservoir. Well marshalled and marked with tape, there are  three ‘notable’ ascents to sort the field out but having something left in the tank for final flat four miles back to Rother Valley is an asset. Whilst past strategies have largely revolved around whether road or trail shoes should be worn, correct hydration was the main concern this year. With three water stations, each passed twice, it was therefore a busy day for the marshals who kept to their task with gusto. 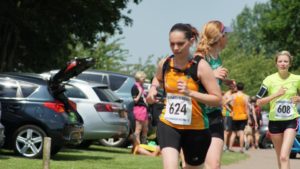 Laura Fletecher forced into a sprint finish after running for sixteen miles in record temperatures.

At the sharp end Stuart Carrack took silver in 1:50:54 to Clowne’s Darren King who won in 1:43:17. With a top ten overall position, Sian led the ladies home in 1:57:58. The results show 183 finishers although we did notice some competitors apparently crossing the line to get their goody bag who didn’t look as though they had run the full sixteen miles. The weather also claimed its victims with one Strider and one of the marshals both ending up on a drip at the Northern General Hospital but happily all is well and no lasting damage has been done. The contribution of the bottle of wine acquired at Grindleford earlier in the week to these events has yet to be established. The hot weather also played havoc with the cream cakes although our Sally Ann Winslow confessed that she couldn’t face any having been running for nearly three hours.

Twenty six Striders finished, a testament to this race’s popularity and there must be a case for The Three Lakes to be re-instated into the club championships. 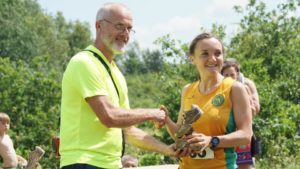 All smiles for Sian.