The Long Distance Walking Association describes itself as an association of people with the common interest of walking long distances in rural, mountainous or moorland areas. They organise local groups across the country as well as a series of challenge events of between 20 and 100 miles, for runners and walkers.

I was entirely unaware of the LWDA or the Three Shires event until Nick Burns mentioned it earlier in the year. Intrigued, I had a look at the route; a choice of 29, 27, 22 and 20 mile routes was offered, all exploring the south western corner of the Peak District. I tentatively agreed to run the 22 mile route, but was subsequently persuaded that the full 29 mile route might be doable, so I apprehensively agreed to take part in what would be my first (albeit small) ultra.

The event instructions gave us some sense of the navigational challenge; four sides of detailed and, at times fairly bewildering instructions. With no chance of a recce, I spent a few evenings plotting out the route onto an ever-larger part of OL 24. It all looked pretty daunting.

Come event day, the 160 participants assembled at the Swythamley and Heaton Centre, on the edge of the Peak District. I was encouraged by the free tea on offer; less so by the leaden skies and the fairly bleak weather forecast. We set off with the minimum of ceremony from the car park at around 9.00.

The route initially took us east, then across the Roaches from south to north, before dropping to the first check-point at Roach End. From there we continued north, before turning west, ‘enjoying’ the sharp climb up to Shuttlingsloe (‘the Cheshire Matterhorn’) – this should have been a highlight of the route, but the weather decided to turn for the worst at this point and steady drizzle turned to fairly heavy rain, denying us any kind of view from the summit. From there we headed south to the second check point to in Wildboarclough village hall, where a vast array of tea, cakes and snacks were on offer, as well as plenty of encouragement. Those of us on the 29 mile route then set off on the Cheshire loop, a seven mile out-and-back, before returning to WIldboarclough for more tea and cake and the third and final check-point.

The last stretch of the route took us back to the start point over an undulating nine mile route, travelling west then south. Spirits were lifted by knowing this was the last stretch and the improving weather; we finally saw some sunshine and Shuttlingsloe’s fine summit. Kudos to the sadist who designed the route so that, at mile 28, it would pass Wincle’s micro brewery and bar, with a healthy selection of customers enjoying a beer in the sunshine.

Nick and I arrived back six and a half hours after we’d set off, about an hour behind the quickest 29 miler, though no one seemed too concered about times. There was an impressive selection of food and more hot tea on offer to finishers; no wonder runners were instructed to bring their own mug.

All in all, this was a thoroughly enjoyable event, despite the weather. It cost just £13 to take part (I’m pretty certain I ate £13 worth of cake) so represents particularly good value for money – LDWA members pay just £7. For anyone contemplating their first step into the world of ultras, these LDWA events are well worth a look; well organised and plenty of support and encouragement. I’m already contemplating November’s Six Dale Circuit; a mere 25 miles, but another cracking route and another bargain at just £12 to enter.

Many thanks to Nick for persuading me to attempt the longer distance and for waiting for me at the bottom of every hill.

All LDWA Challenge events can be found; here 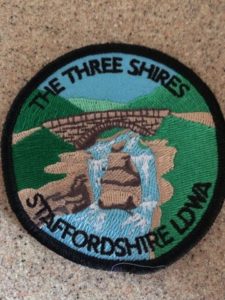 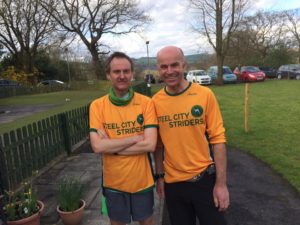