The following is a race report from Tigers Todger by Jeni Harvey. Full Strider results can be found here.

Two years ago, the Tigers Todger – a 5.5 mile trail and road race around the western edge of Sheffield – was my first official fell race. In my run report at the time I described it as “tough but incredible fun” – and after this year’s running, I’d say the same again.

Although it officially requires full FRA kit to be carried, including a whistle, full body waterproof cover and emergency food, the Tigers Todger is definitely at the entry-level of the fell race spectrum. At least two miles of it are on road, the rest are on well-used trails, and I reckon I could’ve even been more comfortable in road rather than fell shoes. So it was ideal for me, a definite fell running novice, to have a fun night out on a warm but windy Wednesday.

So after pulling together my whistle and waterproofs, as per the online instructions, I turned up with my full FRA kit at Tigers Rugby Club to discover that full kit wasn’t mandatory after all, due to good weather – which was something of a relief. As much as I wouldn’t mind carrying my Camelbak if I thought it might be necessary, it seemed somewhat overzealous for a short trail run on a warm spring evening.

Several Striders were already limbering up as I half-heartedly warmed up on the rugby pitch, and then we were off, on the tarmac, heading down Hathersage Road. As I knew there’d be limited opportunities to overtake once we were off-road, I tried to get in a decent position early on, and went through the first mile in 6:44.

After that, we swung left and began heading up the trail of the Limb Valley, surrounded by lush greenery and overhanging trees. The climb is steady and felt tough (well, for a fell running novice like me, it did), though it passed quickly, and I was pleasantly surprised at the top by Goldstar Andy Davies his daughters, armed with a camera and cheering us on. 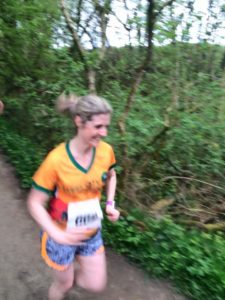 Reaching the top of the Limb Valley

The trail opens out onto fields near Ringinglow, before the race carries on upwards through Lady Canning’s Plantation. At this point I’m not particularly sure if the trail became steeper or just felt that way because I was tired. Either way, I was definitely starting to struggle, and the top of the hill, at around the four mile mark, was a very welcome relief.

The race was slightly shorter than in previous years, as the area around the Ox Stones, on Burbage Moor, is currently under protection. A couple of hundred metres or so on the moors – arguably the only “fell” part of the race – were therefore cut off as, instead, runners turned left to descend quickly down the trail towards Sheephill Road.

Like in 2015, I found this bit tough, and a handful of runners – mostly men – began to overtake me as they flew over the rocks and mounds of earth while I gingerly picked my way along. Descent, I’ve learned, is definitely not one of my strong points. Still, I managed to just about hold my place, and I was the one doing the overtaking when we hit the road and began the fast descent down the Long Line.

I crossed the finish line in 46:37, a huge improvement on my 2015 time of 53:06, even taking into account the slightly shorter course. And what was particularly lovely about the finish line wasn’t just the fact that it was the end of the race, but the sight of a true Striders welcoming committee at the bottom of the rugby field, being led in their encouraging shouts by the very enthusiastic Paul Stuart.
The Tigers Todger may not be considered a “true” fell race by the most hardened of fell runners, but it was a tough enough challenge for me. The morning after, my legs were most definitely Todgered, and I only felt halfway back to normal after a gentle – and flat! – recovery runch along the far more gentle terrain of the Five Weirs Walk.

The race was won by Matthew Elkington of Dark Peak in 31:50, while the first woman home was Despina Berdeni of Totley AC, in 39:56.

First male Strider home was Doug Banks in 36:06, and the first woman Strider was Alison Barrett in 42:37.

Our men’s team of Doug Banks, Paul Stuart and Tom Bassindale were eighth overall, while our women’s team of Alison, me and Helen Cain were fifth.