Some Striders had mixed feelings about this race which started and finished at Sherburn Aero Club with strong positives but some unfortunate downers which could have been avoided.

Plenty of parking but with half a mile walk to the start for some unfortunates. No pacers, although this might be a negative depending on your point of view. T-shirt (including an XS that actually fits says Val) and medal if you like that sort of thing. Chip timing, vital with a field of 1680 finishers.

Full road closures and plenty of marshals. Genuinely fast, flat course although exposed in places especially on the airfield. With the wind picking up later in the morning the faster ones were lucky to get away with it but the slower competitors had a double whammy. Winning man was Daniel Kestrel, Barnsley Harriers in 1:09:14. Fist lady was Faye Banks, Pontefract in an impressive 1:17:48. Our own Charlotte Maddox ran a massive personal best and whilst our old’uns don’t run pb’s any more, some of them seemed to have liked it here: Mark Gray was 2nd M45, Nick Scott was 3rd M50 and Barry Gyte was 2nd M60. On the achievement stakes Louise Cousins completed her first ever half. 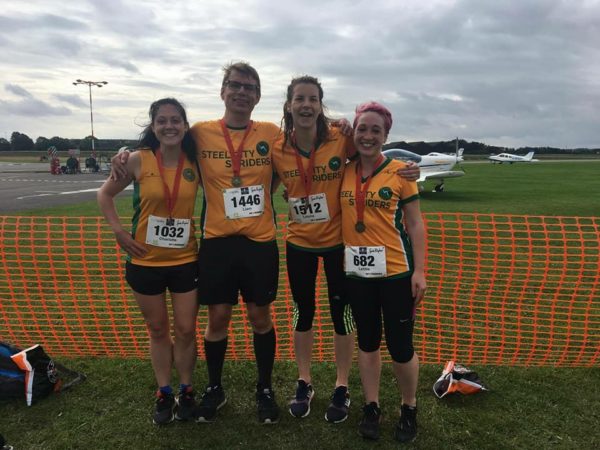 Some Striders clearly happy with their medals.

Expensive, so we wanted value for money. (Not as expensive as the Great North Run. Ed). There were long queues for the car park, race registration and the loo all of which led to a start delayed by ten minutes. Talking to other competitors, this happened last year so it’s  disappointing to get a repeat performance.

Narrow start with no pens with predicted finish time leading to confusion. Some competitors were clearly out of their depth with others getting away unnecessarily slowly. The start was on an airfield so surely there could have been enough space to improve this, an important point with so many people taking part. Pacers, which seem to be a common feature at road races these days, were absent although this might be a positive depending on your point of view.

The goody bag had a bar of chocolate in it if you don’t like that sort of thing.

So, will we go there again next year? Possibly probably.