The North London Half Marathon is part of the Vitality series of runs and takes in the suburban delights of Barnet and Brent Cross on its way to a mid-point lap of The Allianz Stadium, home to Saracens Rugby Club, before returning to Wembley Stadium and The Greatest Finish Line In The World™. The 2017 running (the third of it’s kind) took place under grey skies, with perfect running conditions up until the heavens opened on those still out on the course after two hours. Paul Whittaker of Southend was probably enjoying his well stocked goody bag and free post-race massage by then, being the first male home in a time of 1:08:55, and Maria Wågan (of Namdal RC in Norway) wasn’t far behind as first female in 1:19:10.

Of the 5806 runners that took to the streets, two Striders had made their way down to the metropolis from Sheffield, both respectfully finishing before the rain came.

Another innovation for the Vitality North London Half Marathon is the free on-route race photos provided by Gameface media. This one of yours truely was taken on the corner before the home straight. 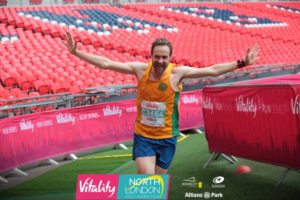