The Crinan Puffer is a lovely little race along the Crinan canal towpath, just over 8 miles long. 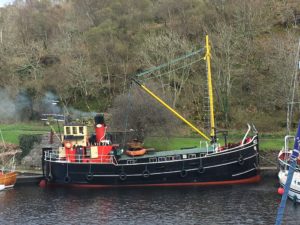 Mark and I decided to enter this race as we could stay on our boat which is moored at Bellanoch on the canal, then go for a few days of sailing. As the weekend approached we saw the temperatures rising in the south with London marathoners facing the hottest ever race, but for us the outlook was much cooler…and wetter.  It takes 8 hours to drive up to the boat and the temperature difference when we got there made me regret only taking a 2 season sleeping bag. On Sunday morning we woke to the rain pounding on the deck…it was going to be a wet day.

The race is a point to point starting at Crinan and finishing at Ardrishaig, so the organisers base themselves at Ardrishaig hall, and this is where we picked up our race numbers, listened to the briefing and left our bags. We then boarded coaches which took us to the race start at Crinan.  The start was very low key, the tow path is narrow so we were asked to line up according to how fast we expected to run.  Mark and I happily stayed near the back as we are not in great form at the moment!  I say ‘happily’ but we were getting soaked, and it was good to get started. 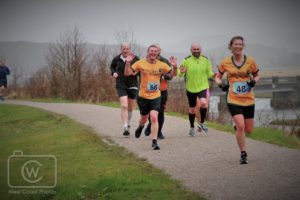 The first few miles along the canal are especially beautiful and so peaceful, but the views are lovely the whole way.  The route is predominantly flat, the only noticeable gradient is towards the centre of the canal where there are also a number of locks. The race actually starts at lock 14 and finishes at lock 4 so I distracted myself counting them down.  Lock 5 is only just after half way but marks the end of any ‘uphill’, I knew this but somehow found the run harder from this point on (just not race fit).

With about 3 miles to go the canal changes direction and heads southwards, and more importantly for the runners, it had us into a head wind for the rest of the race.  Still we had the town of Lochgilphead to look at from the elevated canal with loch Fyne in the distance, before coming to Ardrishaig.

As the race is not an exact distance it is difficult to judge the end and I had prepared myself for running nearer to 9 miles. So, as we rounded a bend at just over 8 miles I was pleasantly surprised to see the finish 100m away.  Mark had done exactly the same but could hear someone sprinting up behind him before seeing the finish and he put in a strong sprint to stay ahead.

We then had a short walk back to Ardrishaig Hall where we were greeted by children handing out goodie bags (I liked the beanie hats included).

There were hot drinks, chilli and rice, soup, sandwiches, cakes and fruit in plenty. The hot food and drink was especially welcome as we were soaked to the skin, and I was happy to donate to the guides and scouts who had put on this spread. Money raised from the run actually goes to the local swimming pool and anyone running could go for a free swim that day. 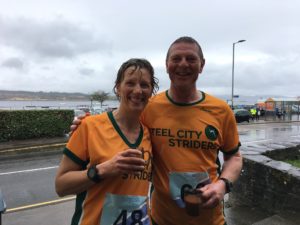 You only get wet once – well normally that is

Trophies were awarded to the first of each category which had great names. We were in the 50-59 age group – the Super Veterans, and I think I’ll have to run it again when in the 60+ ‘Vintage’ category!

The timing was all done manually and they did have an issue with my result, sorted within minutes after I emailed them. To my surprise I had come 2nd in the female Super Veterans. The atmosphere was so friendly and relaxed, and most people seemed to have run the race in previous years. If you happen to be in the area, it is well worth running this race. After hot showers and dry clothes, we felt very satisfied with the day and returned to the boat ready to take it out to sea at Crinan… to get cold and wet again. Mark asks if this counts as a duathlon?? 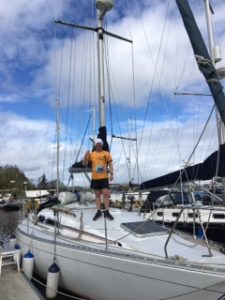 Shiver me timbers … Back at the boat with medal and hat

Map for those who didn’t realise that this race was in Scotland. Ed.