Well! I had a shocker!

A category ‘A’ Long fell race with over 1290 metres of climb and a distance of approximately 17 miles. Competitors can choose their own route, ensuring that they visit all the 9 checkpoints. The Totley AC website states ‘….. the route is quite complicated with several route choices………..is a challenging race with great views…………..navigational skills essential’

The last of the Totley series, with ‘Tigger Tor’ in January, ‘Tiger’s Todger’ in May, ‘Totley Moor’ also in May, ‘Blackamoor’ in June and the ‘Exterminator’ in September. These are a great series of races and cost just £25 to enter them all in January and if you do 4 of the races which includes the Exterminator you are rewarded with a series T Shirt at the finish of the race! Which is an absolute bargain for almost 40 racing miles covered in total for just £25 and a free T Shirt! What is not to like!

I do love this race and still remains one of my favourite.

Looking on the pre-entry list the night before, there was almost 20 Striders entered, but on the day there were less than doubles figures that started the race.

I was feeling very optimistic of beating last years time of 3 hours 48 minutes, as last year I had ran with the sweep some of the way and really had had a lovely jolly time and was quite refreshed at the finish. This was not to be!

I was feeling quite blasé at the start and I was not feeling at all daunted about what lay ahead! after all, this was going to be a lovely ‘long walk’ around out ‘back garden’.

Starting the first climb I was thinking I don’t remember this being so tough? But I though ‘maybe I’m running really fast!’

Up and over Totley Moor – all Ok (ish)

Along to Burbage rocks and down to the gate – all Ok (ish). I passed a guy here not looking too good and walking.

Up towards Higger Tor, and the shouts of ‘come on Jill’ could be heard from Naomi & Andy, which was really lovely. They must have been waiting a long time to offer me encouragement and it was very much appreciated, Thank you guys.

It was about here runners around me were beginning to get lost and strangely were following me!!

To the checkpoint and down the ferns into Hathersage, and the back of the church, and this is where ‘the wheels started coming off !’

I began to feel fatigued so I had a cereal bar and a gel, but still found that I could only walk (quite slowly) up the hill to Mitchel’s field. A guy was now running/walking with me as he said he didn’t know the route and had already done 10 miles! He too was tired and just wanted to not get lost again. We almost crawled up Mitchel’s field and across the road and up again!

It was now down to the pumping station in Grindleford, which is ‘down’ but I was still finding it hard to run so ended walking most of the way, at this point I’d had my last gel (I only brought 2,) and for some reason! I decided not to have a drink at the water station!

The guy (name not known) was still sticking with me and we were joined by two other runners who couldn’t find the route across Padley Gorge. I knew the way as I had ran this many times and was confident of the route so they all followed me (later to overtake me and run into the distance)

Up and out onto the road, and the white gate into Longshaw was across the road, but here, I found myself leaning on the wall and I was feeling dizzy and looking at the white gate and thinking ‘how am I going to get up and over Longshaw?’ The decision to walk had been made a few miles previous, but the reality now was physically how to put one foot in front of the other! A runner came past and asked if I was ok? I told the guy who was sticking to me to run on and just follow the path and stream up.

I walked very slowly through Longshaw, the sun was feeling hot and I was ‘shade hunting’ and my stride constantly shortening to a shuffle, I saw people pass me and run/walk into the distance. (The thought of the free T Shirt on finishing firmly in my mind).

Up and back out towards Totley moor and to the road and to a couple of guys that I know from fell racing who kindly gave me a drink of water, which helped a lot.

I walked up to the trig at Totley moor and managed the downhill and through the horse field and to the finish (colliding with another runner who’d just come to a stop at the finish!)

I just wanted water! and almost drank the water tank dry! Yvonne, from Totley, fed me food (thank you Yvonne)

I finished in time to see Caroline win both the race and the series, super.

My time? Just under 4 hours! But I wasn’t last! Although it is perfectly fine to be last, a place I have occupied many times!

I’ll be entering again for the series in January as it still is my favourite race and there still is a time of 3 hours 48 minutes to beat! 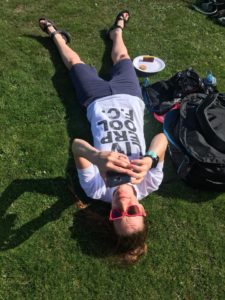