The Bridge Too Far Ultra is a 37 mile race in the heart of the Yorkshire Dales, which takes you along the Six Dales Trail from Otley through the dales of Wharfedale, Washburndale, Nidderdale; passing by Swinsty, Fewston and Thruscross Reservoirs before heading over to Pateley Bridge and then all the way back to Pool-in-Wharfedale.

Eight checkpoints ensure that competitors complete the full length of the trail before doubling back, but as each point is stocked to the gills with water, coke, jelly babies, peanuts, Jaffa cakes, marshmallows, flapjacks, and as a special treat at the end, pork pies and cheese as well as hot drinks, then no-one complains too much about having to check in! Strider Jo Taylor completed the course in just under 7 and a half hours on her way to 4th lady overall, but claims that at least half an hour of that time was spent sampling the checkpoint goodies!

45 runners completed the 37 mile course. The winner was David Stoneman of Skyrac Athletic Club in a time of 5:53:29, and first Lady was Emma Lavelle-Wood of Kirkstall Harriers in 6:41:30. Two Striders completed the race, Vincent Baker in 7:22:27 and the aforementioned Jo Taylor in 7:29:10. Well done both! The full results can be found here.
Jo Taylor gives us her account of the race…

12th May … the date had been ingrained in my memory since January with a mix of fear and nervous excitement…it was the date of my first ultra marathon.

The Punk Panther Ultra marathon, “A bridge too far”, was the second of a series of 7 ultra’s that all start from Otley, West Yorkshire.  There was a choice of either 32 or 37 miles. I was keen to do the 37 miles as wanted to enter something in between marathon length (having previously done a couple of marathons) and a 50ish mile ultra.

I enjoyed the training… but found it hard. With lack of time, I felt like I had to squeeze runs in at any available opportunity. The weekends meant setting an alarm for 06:00 and setting out (after a quick bowl of porridge) for a 2-3 hour run on BOTH DAYS!

The 12th May arrived, and after another fairly early start at 05:55, to make yet another bowl of porridge, I set off from a nearby campsite for the Community Centre in Otley. It was much sunnier that I was expecting it to be, so frantically started applying suncream in the car park and then followed some much leaner and stronger looking runners in the direction of the race start. I could hear footsteps behind me, so decided to stop and wait for someone else. It turned out to be Vincent Baker, another Strider! A weird coincidence that he was the first person I spoke to!

The community centre was already full of runners that looked relaxed and ready to go, whilst I still had to register, finish packing my bag, have my kit checked, visit the toilets, pin my number on to the vest…  with so much still to do I was feeling slightly worried that everyone would set off without me! We had a quick race briefing from the race director, and then all went outside to start.

The route was an out and back route which mainly following the 6 dales trail. From Otley we were straight into lovely countryside and heading up a big hill and then down hill to the first check point at Dob Park Bridge. From here we followed the river Washburn and then uphill again to run along the paths by Swinsty Reservoir and Fewston Reservoir. This reminded me of the paths around Dam flask as it was fairly flat and easy running! Checkpoint 2 was at the end of Fewston Reservoir, and there was the chance to try out some Peak Pinole Ultra Bites (which are soon to be in production). The route then went uphill again and through fields with many gates to open and stiles to cross! From checkpoint 3 at Hayshaw to the turn around point at Pately Bridge was my favourite part of the race, lovely views, beautiful woods filled with bluebells and downhill over slightly more interesting running terrain. I like running downhill! The hill out of Pately Bridge on the way back felt pretty brutal and it was hot, but I kept on thinking we’re pretty much half way now so just got to keep on running. I felt mostly ok but had a bit of a wobble around 22 miles, feeling slightly low in energy levels. I decided I probably needed to eat more and drink more and started feeling ok again. My husband and two boys were also waiting at the top of a hill to cheer me on at this point, which was slightly unexpected as I thought I wouldn’t see them until the next check point. With encouraging comments, and the prospect of easier running around the reservoirs I pushed on. Once nearly back at the start point, I started having thoughts, “why am I doing this?”, I don’t really like running distances over 20ish miles”, and “I am never running this far again”. Looking back, I can’t say I was enjoying it at this point. But I got there, the final checkpoint, and the marshals full of encouragement told me to enjoy the last 3 miles. I set off full of high spirits, it was really lovely running through Otley. There were families out enjoying themselves at the park, people eating ice-creams and on the pedalo’s on the river. There was a lovely atmosphere and I kind of felt part of it, although we soon left the buzz of the town centre and carried on along the river. It was nice for a while but then we left the river and followed a small road on to a much bigger main road. It was coming up to 38 miles on my Garmin… but no sign of the finish. The doubt’s started … am I still going the right way? How much longer am I going to need to run? I’m also not a fan of running along busy main roads … and then I saw the shell garage and I new the end was in sight.

I finished the 37 mile ultra (which was actually 38.8 according to my Garmin!) in 7 hours 29, finishing in 15th place and 4th lady. Vincent Baker finished in 13th place in 7 hours 22, but kept on running until he had clocked up 39 miles! I had a great time and enjoyed most of the ultra. They are also fairly laid back friendly events, with people there just wanting to have a good day out running… and there’s food! I met so many inspirational people and enjoyed many chats with the other runners over the course of the day. If you’re thinking of running an ultra I would definitely recommend Punk Panther Ultras. They are super friendly and well organised and in a beautiful area. Will I run another? I’m not sure … but I’m already wondering if I could have run further or run faster, and I guess there’s only one way to find out! 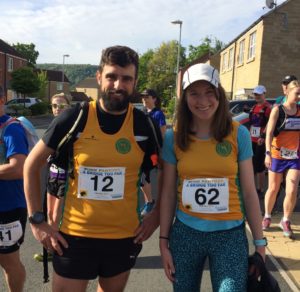