There’s a yet-to-be named law that links the prettiness of a place name and its actual appearance. It is, in my experience, an inverse relationship. I once applied for a job at Bramble’s Farm Primary School, thinking it would be all green fields, country lanes, cows chewing the cud, berries for foraging, blue skies, picnic baskets with gingham covers, warm beer, cricket on the green, vicars on bicycles… It was tower blocks and bookies’ shops, chip shops and a Rec. Shopping trollies left at traffic lights.

Cowpen Bewley Nature Reserve is close to Seal Sands and Saltholme RSPB, and from the top of the sculpted hill with its 360o view you can look over to the Eston Hills in the south and the Yorkshire Dales in the west. You can also see the Hartlepool nuclear power station in the east and chemical works everywhere else.

The location is one of those reclaimed places, like our own Kiveton Park Cross Country venue: thin soil, water-logging, silver birch and, at this time of year, mud. Lots and lots of it. Today’s race was a struggle from start to finish. The sort of race where you deliberately run through puddles to wash off some of the weight of mud making your soles three inches thick.

Last year, when the weather was colder and wilder but the ground was harder, I ran the course 22 seconds faster than this year. I think the strains and efforts of the cross country season may have helped me, however, lift my finishing position from 33rd in 2017 to 26th this year.

BMHH started the race a few years ago in memory of a past member who had recently passed away. Today I wore my Motor Neurone Disease Association vest in memory of my father, who died just over a year ago, and my gold and green ribbons, for Trevor. 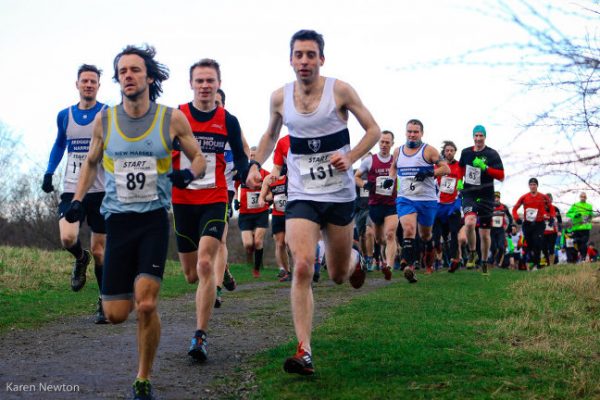 (Ed: This photo is from the 2017 Absent Friends – we couldn’t find any pictures from the 2018 event, despite this being the internet in the 21st Century. Did it even happen? Anyone seen a Strava activity for it?)