The Oxspring Hunshelf Amble is a multi-terrain race based on the former Hunshelf Amble. Whereas the former race started and finished in Green Moor, taking in Oxspring en route, the 7½ mile, undulating, mainly off-road race now starts and finishes in Oxspring, passing through Green Moor. The Amble’s Revenge, run around New Year, is the same route in reverse, with a small diversion to avoid the stepping stones crossing of the Don.

Rather confusingly for the race report writer, the 2018 staging of Amble’s Revenge was held on 31st December. 152 athletes took advantage of the increase in temperature to see out the old year on the moor and first back down to Oxspring was Gareth Cooke of hosts Penistone Footpath Runners in a time of 56:25. First lady was Zanthe Wray, of Dark Peak Fell Runners, in a time just over the hour mark in 1:00:14.

The allure of a group social run around Howden and Derwent was not enough for five hardy Striders, Paul Stuart being the first to complete the course in 1:04:44. Well done chaps, even though you were sorely missed at Fairholmes! 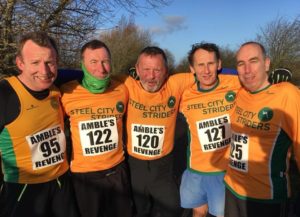