Four intrepid Striders ventured to the wilds of Newton Aycliffe, 2 hours’ drive up the A1. Three of us (myself, Stuart Jones and Gareth Pert) have connections with either Newton Aycliffe or nearby Darlington. Newton Aycliffe itself was one of the original new towns and was planned and built prior to Milton Keynes to take the pressure off nearby Durham and Newcastle and is the birth place of my wife. Nearby Shildon is the birthplace of the railways and I would recommend a trip to the Locomotion Railway Museum.

We met at my in-laws house and we sauntered down to Greenfield School where we were to register. Upon arrival, the registration process was fairly quick and painless, what you would expect from a small scale race. Although disaster struck as we found out that they had run out of safety pins but we were saved by Stuart who managed to produce enough for us.

There was the usual bits of banter that you would expect with myself and Stuart on the start line. We got talking to several people from various local running clubs such as Darlington Quakers and Aycliffe Running Club. At one point we ganged up on Stuart and had a debate about whether he should tuck or untuck his vest, there was an idea to take a selfie near the Angel of the North as this is what people would expect even though it is miles away. I suggested having a photo taken in front of the Aycliffe Head (see picture underneath) it is awesome (not).

The main race got underway at 10am, starting near Greenfield School with a small loop before taking on the two large loops which pass Cobblers Hall and Bluebell areas of Newton Aycliffe. The whole route has road closures to ensure the safety of all runners.

The main race was won by Yohannes Eyob of New Markse Harriers in 33:31, followed by Stephen Jackson of Elvet Striders in 2nd place in 33:43 and John Clifford of Evenwood Road Runners in 3rd place in 33:52. First woman home was Michelle Nolan-Hood of Gateshead Harriers, in 40:11, Ruth Dadswell of Birtley AC was 2nd woman home in 42:16 and 3rd place woman was Rachel Adamson of Tyne Bridge Harriers in 42:31.

(official results are yet to be published) 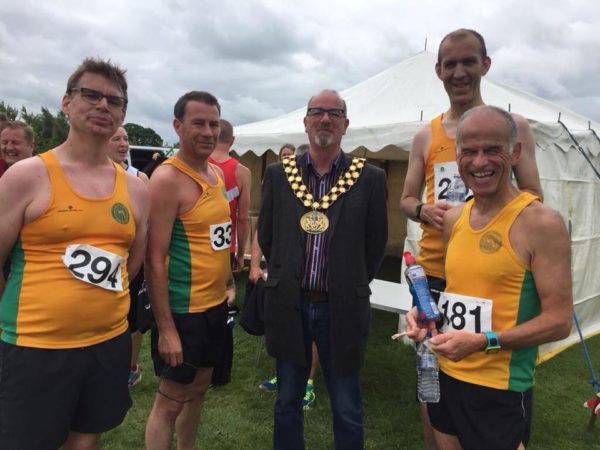 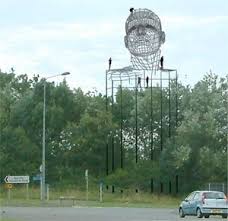