After booking our family holiday curiosity got the better of me and I started researching any events that may be taking place on island whilst we were out there. I dropped lucky and bang in the middle of our 2 week holiday was a Barbados 10km at Belleplaine. Without a second thought I signed up.

I knew it was going to be hot but after running some hot events this summer in the UK passed it off thinking I will be fine. There was a choice of 3,5or 10km. All started simultaneously and though your number said which race you were in you could just opt to finish early and still get a time in that event. I.e you signed up for 5km then after 2km you thought I will go through the tape at 3km, you would have been included in the 3km results.
As many of you who know me know, I don’t like to give up on anything at all if I set my mind to it and so I said I was running 10km and that was that.

I set off and tried to keep up with a guy who used to run for Ireland with a PB of 31 mins and now lived in Barbados as a teacher. He was running 3:35km/min pace which for me back home I could just about live with. Here it was a different story. The legs and muscles where fine but after 2km the heat suddenly dawned on me. 35C with 100% humidity I was already in trouble. By 4km I was thinking of going through the tape at 5km and getting a result, I was having a massive mental battle.

Next I saw that the 5km tape was not broken after lap 1 (of a 2 lap race). I was in 4th in the 10km at this stage. My choices now I could bail out and take the glory of winning the Island 5km in circa 19min and forever bask in the glory. No one would ever know on Strava/Results …Or I could be true to myself, keep my integrity, knowing I was fading and just be proud to do a carriabean 10km regardless of time. Tempting as it was, I signed up for 10km my family and a few fellow Striders knew I was doing 10km and that’s what I would do. So I pushed on.

By 6km I really thought I’m going to have to walk and give up, but somehow didn’t despite every fibre in my body telling me to. I actually felt wobbly on the old pins. At 7km I got to the water station threw one over my head then walked for 20 secs drinking the water. Same at 8km. I was clinging on for pride and to do the best and my family justice who had driven 35min with me by taxi to get there. Inside I was dying and I’m not been dramatic.

Looking back could I have started differently, possibly, A few less Rum punches the previous week, possibly. But genuinely it would have amounted to seconds as if I didn’t succumb to the heat at 4km it would have only been at 5km etc. It’s a strange one as I’m really proud for once, just to have finished and don’t care about the time that much. This attitude is alien to me but know how much I went through the mixer to finish.

Thanks to all you Striders, as the vest and who I represent means a lot to me and it’s times like that, it really keeps you going. WASAW 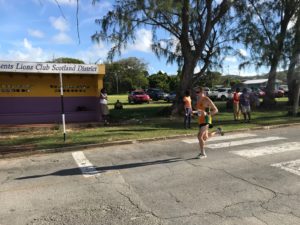 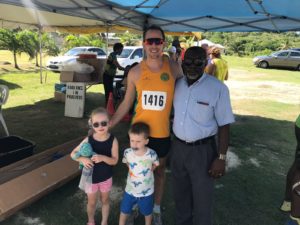 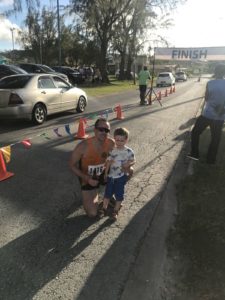 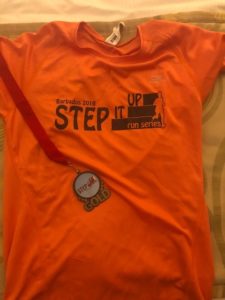