Barnsley 10k is known for being in Royston, and for its witty t-shirts that claim it’s hilly. It’s not that hilly if you’re from Sheffield but it’s definitely a good workout. This year’s race was the final leg of the Striders Road Race Championship, and there was a good turnout from the club.

The race was won by Scott Hinchcliffe in 33:18.9. First female was Helen Cross of York Tri Club in 37:03.9. 498 runners finished, of whom 26 were Striders. There seem to have been some problems with the results, hence the question marks on some of the placings below.

Full results can be downloaded at: http://www.barnsleyac.co.uk/Downloads/Barnsley10K_Final_Results_2018.xls 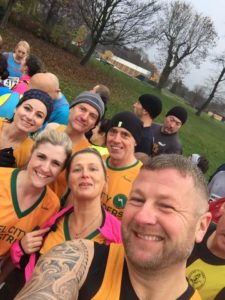