Barrel Inn, which starts and finishes in the picturesque and infection-free village of Eyam, is always popular with Striders. Nick Burns described it very nicely in 2017: https://www.steelcitystriders.co.uk/2017/barrel-inn-fell-race-result-2/

It’s a 10km-ish up-and-down fell race, a fair amount of which is trail. The hill is hard and the views are amazing.

Of the 234 finishers, a massive 22 were Striders. Race winner was Harry Holmes, of Pudsey & Bramley in 39:12. First female was Caitlin Rice of Ribble Valley Harriers in 46:41. It was a great night for Striders: Paul Smith won the M50 category, Lucy Broom won W40 and Nicola Rafferty won W50, with Victoria Hawkins 3rd in the same category.

Full results can be found at: http://eyamsports.nfshost.com/attachments/BIFRResults2018.htm 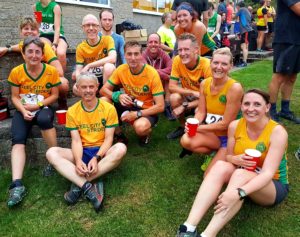