The Boot Bash is an annual event organised as fundraising event by Baslow choir. It is open to runners and walkers and offers a choice of 14 mile and 26 mile routes. This year Mir Jansen and I had both registered for the 26 mile option which follows a circular, predominantly off road route through some of the most attractive parts of the Derbyshire Dales. There are seven checkpoints to be visited and a recommended route between these is marked on maps available to view at the registration point. As tends to be the way with these sorts of event, the advertised distance bears only a passing resemblance to the actual distance, which from previous experience I knew to be just short of 28 miles. The total ascent is about 3,800 ft. The route can be quite difficult to follow in some places, and as I had done it twice before I offered to be in charge of navigation. Armed with previous experience, a map and a gpx. file on my watch what could possibly go wrong?

The day had started cool and overcast which was very welcome given the recent warm and humid weather, and it was looking like a great day for running. After registering at Baslow village hall, we made our way to the starting point in a field at the edge of the Chatsworth estate in time for the mass start at 9am. The first mile or so is flat passing through the Chatsworth estate and past the house before crossing the road at Edensor and beginning a long steady climb for about 2 miles followed by a nice woodland descent to the first checkpoint. The marshals here suggested a diversion onto the road to avoid a path overgrown with nettles. However, being seasoned Striders with plenty of experience of the Dronfield and Sheffield Way relays we laughed in the face of the nettle threat and bravely ploughed on.

After crossing the A6 at Haddon Hall, there was a long strength sapping ascent mainly across grassy fields to the checkpoints at Over Haddon and Sheldon. Thankfully there were fewer than usual cattle on this stretch and so my legendary cow whispering skills did not have to be employed. They seemed to have been replaced by groups of forlorn looking teenage Duke of Edinburgh Award candidates who were both a lot less intimidating than cattle and considerably more likely to hold gates open.

From Sheldon, we descended past some old lead mine workings and into Deep Dale and probably the most beautiful part of the route with its colourful wild flowers and strange limestone outcrops, then followed the River Wye through Monsal Dale to the Monsal Head viaduct. A mile along Monsal Trail was followed by a winding descent into Cressbrook and checkpoint 4. Another long up hill section followed all the way to Foolow and checkpoint 5. It was on this section that we noticed that a couple of groups of runners who we previously overtaken had magically reappeared in front of us, necessitating another overtake. At this point I think Mir was beginning to have doubts about my route finding skills and asked if perhaps we might be running further than necessary between checkpoints. It has to be said that I do have a history of navigational ineptitude in races but this time, I assured her, we were exactly on course. The other runners must have taken an illegal shortcut I said, not quite believing it myself. It was shortly after checkpoint 5 that I realised that my ‘dibbing’ card had fallen out of its plastic casing and was lost. This would mean disqualification but there was no way I was about to start retracing my steps to find it, so we carried on.

After passing through Eyam, we came to a fork in the road. The choices were right and downhill towards Grindleford or left and uphill towards the Riley Graves. My memory of the route suggested the latter option and I was quite confident in this until, descending towards Froggatt we caught up with two men and a woman who we had overtaken previously. They had taken the lower route and cut in front. I found myself becoming unreasonably annoyed by this and was considering taking it up with one of the offenders when he handed me my dibbing card which he had found and kindly picked up. He was instantly forgiven.

The route through Calver Village can be a bit tricky and the organisers provide a separate map for this section. We followed this, only to find the same group of three runners appearing in front of us yet again as we began the steep climb into the woods. They had found another shortcut! Or, at least that what was I protested to Mir whose already limited faith in my navigational abilities was disappearing rapidly. Having overtaken the group yet again, my rarely seen competitive side made an appearance and I decided to start pushing the pace as we passed through Bank Wood to make sure we kept them behind us. All this hard work was undone at the next road crossing where I managed to miss one of the rare signposts that had been put out for the event and took us 200m in the wrong direction allowing them to catch up again. For some reason Mir did not seem to see the funny side of this and suggested that any further such incidents could be punishable by death. However, I made it to the final checkpoint at the bottom of Bank Wood alive and from there it was a long straight downhill on the road to Baslow and the finish.

At the Village Hall we were presented with a certificate and sew-on badge and a very welcome meal of pie and peas. All in all it was very enjoyable day out and I would thoroughly recommend it to anyone wanting to take a first step towards ultra running. A really well organised friendly low-key event. Just don’t take me with you to navigate.

First finisher was Damian Thacker in 3:40

First woman was Claire Howard of Totley AC in 4:52

Full results can be viewed here 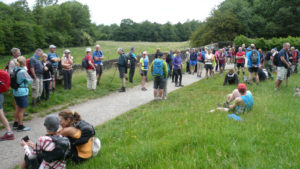