The Berlin 25k race was started in 1981 by the French Armed Forces stationed in West Berlin. The original course must have been different since the race now goes down into previous East Berlin. It’s a great run that starts and finishes in the iconic Olympic Stadium and goes nicely down through the Brandenburg Gate and unfortunately then goes back up the hill!! The Stadium is renowned for being the venue for Jessie Owens historic 4 gold medal haul in the 1936 Olympic. It was also the venue for the 2006 World Cup Final where the great French footballer, Zinadine Zidane, decided to mark his final game by headbutting Marco Matterazzi and getting sent off.

The whole event has 4 races – the 25k, a half marathon, a 10 k and a 5×5 relay making an ideal event for runners of all ability. Berlin itself is a great city to visit being relatively cheap to get to and stay. It is steeped in history, has wonderful museums, has great bars and restaurants and, importantly, now has a Parkrun.

Each year Strider Richard Pegg visits to run the 25k event. However, this year he bribed his son, Alex, to choose the 10k to have his Debut race. So Richard dropped down to that discipline. It took a lot of persuading and around 6 pints on a boozy trip around Kreuzberg on the Saturday before the event. They both  got around in 1 hour 13 minutes. It was a tough baptism of fire for Alex – with a big hill and temperatures in the late 20s.

The hard work was well rewarded by a fantastic finish in the stadium followed by ample refreshment of water, apples, tea and beer. Both runners didn’t hang around for the drink – instead heading off to a football match at Union Berlin. (NOTE  – another reason to visit Berlin for the race is that the Hertha Berlin games are played away from the city – so a guaranteed home fixture for Union is available for attending)

The races were won by the following:

It’s a great event and, guess what, Richard is now organising next year’s visit where he will celebrate his 60th Birthday. Watch this space! 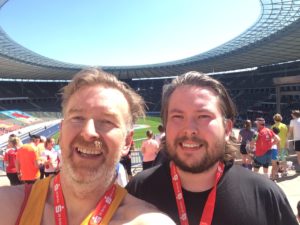 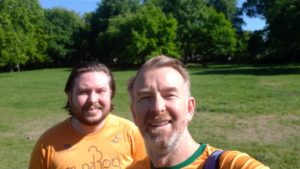 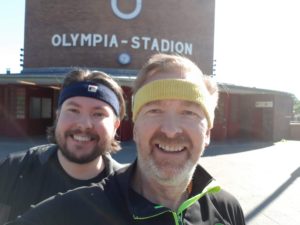