This 11K fell race is organised by Bramhall Runners.

The Bowstones are a pair of ancient Anglian cross shafts situated beside the old ridgeway between Disley and Macclesfield overlooking the gorgeous Lyme Park, with extensive views across the Cheshire Plain, to the city of Manchester and the hills of the Peak District. Local legend states that the name is derived from their use by Robin Hood and his men to re-string their bows.

The run starts from the Boards Head Pub in Higher Poynton and winds its way uphill, crossing the Macclesfield Canal, into Lyme Park, joining the Gritstone Trail up to the Bowstones themselves, before passing Lyme Hall and the deer sanctuaries near Lyme Cage, eventually winding back down to Higher Pontoon

Amongst the 384 finishers (all of whom received a bottle of beer) this year were two striders. The race was won by Hayley Kuter of Salford Harriers in 50.25 and Howard Oldham of East Cheshire Harriers in 43.35 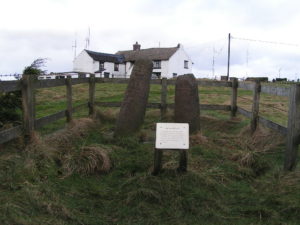