1st July 2018.  Report by Catherine McKeown.
A really well organised North Derbyshire RC event, one lap course taking us thorough some very pretty places offering cracking views. We started at 0930 on the dot from Holmebrook Valley Park out onto the roads and very quickly we began our climb and then climbed some more and then climbed a bit more, at the top there was a great view of Chesterfield in the valley below. Just shy of 5 miles we were treated to a long descent (woo hoo!) into Old Brampton and through Ashgate.
It was hot and rarely was there any shade, an ice cream van passed us at mile 6 and at mile 7 I was ready to wrestle the marshal for her refreshers ice lolly. On the bright side there was plenty of protein snacks thanks to pesky black flies that had a preference for anything yellow, green or gold, some even came home with us and appeared in the shower!
Marshalls were encouraging and plentiful so no chance of getting lost. Three water stations were perfectly spaced along the route and seemed to appear just when the sun became a bit too much and the factor 50 was giving up.
Spire 10 is like the Sheffield Half’s younger sibling, shorter with steep climbs out and some nice downhill, all very pretty until the last mile and half of “upward flatness” along a main road that seems to drag. Soon enough you are back in the park with the finish line in reach and nice treats at the end, Brampton Beer, bananas and a very nice technical t-shirt. 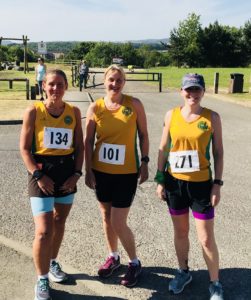