Part of the 2018 Urban Trails series of races by Trail Outlaws, the Branches and Bays 10k is set in a beautiful and historic area of County Durham.

Registration was in the Hawthorn Community Centre and fairly straightforward although they had run out of race numbers so some of us didn’t have one but everyone was issued with a chipped wristband.

Starting in the small village of Hawthorn near the coast, the route led us through some National Trust managed woodland leading to steps down to the first bay. A short run along Hawthorn beach was finished with a steep incline of manmade steps back up to the headland. After about 1 mile a sharp drop down to the second bay, Seaham Blast Beach greeted us. Tough going on the shingle but there was great banter between other competing club runners as we battled our way along the beach. Another steep climb to tackle to get back up to the headland. Then an undulating route of mixed trail back to the village including a railway crossing to navigate.

The route was well marshalled and flagged. Bit of bling and a buff for finishers topped off with cakes and drinks in the Community Centre.

Official results can be found here. 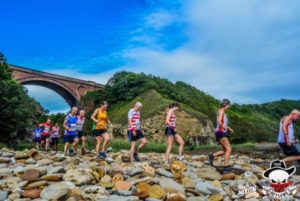