Running through the rural Vale of York south west from York Racecourse, the Brass Monkey is described as fast and flat. Organised by York Knavesmire Harriers it attracts a large, quality field with just under 1500 finishers this year including eleven Striders. In 2017 it’s 1750 places sold out in a Pudesque 38 minutes! Tom Halloway gives us a view from the top and the powers of concentration required to maintain race pace for thirteen point one  miles.

Arriving in York knowing I was capable of running well if I was mindful and patient in the first few miles.
The race was underway at 10am and comfortably sitting it chatting with Rich Spooner from Barnsley running club, hitting the first mile in 5.45 I was pleased and confident that today was going to be the day.
Hitting 5k in around 17.40 and feeling comfortable, the next couple of miles become very hard running into a head wind, but I just needed to tell myself focus and get the job done, it didn’t help I was sitting in front of the group.
The wind soon settled and we hit 10k in 35.40. I was expecting it to become more difficult but I was very relaxed and mile by mile went by hitting 10 mile in 57.18.
The next three miles become very painful after pulling away from the group that I had been running with for about 8 miles. I just begin to push and focus on running sub 1.18 which was the target I set myself.
Mile 11 and 12, 5.48 and 5.48 now I was in pain but I needed to kick on, my breathing began to suffer and I hit 200m to go, now the sprint finish, i kicked and crossed the line in 1.15.32. New PB and over the moon with my run.
While writing this report it sunk in that I was so close to a London marathon champs start place so the plan now is to work hard, back to the training plan and focus on sub 1.15 at Liverpool.
The race was won by Jamie Parkinson of Thames Hare and Hounds in 1.07.12. The first woman was Tracey Millmore of Birtley AC in 1.19.02
Striders Results:
Full Results: resultsbase.net 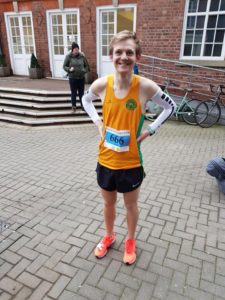