Killing 2 birds with one stone was what I was thinking, go see my Mum who lives at West Bay and do a 10k race while I’m down there

Originally I signed up myself and my wife Gayle but due to her work commitments she couldn’t go so my Daughter Lauren decided she’d take her place.

Lauren had never done anything like this before and only done parkruns in the past. Her training method for this race was a 10 day All Inclusive Holiday in Turkey, landing home 2 days before the race.

I was really looking forward to the race as I was in good condition and honestly thought a PB was on the cards, my best ever 10k was 48min.

The event was at Bridport football ground hosted by the Beyond events group, which was very well organised and everyone was friendly on arrival.

Thinking we were the only Northerners at the race, a man approached me and said bloody hell I’ve come down here to get away from you lot referring to the shirt I had on.

He was Tom Briddock from Dronfield saying that when he does races all he sees is gold and green shirts flying past him, he was aiming for a sub 45min so obviously I said there will be no gold and green doing that today.

So with the race being on the south coast the weather was bound to be awful, yeah right. Not a cloud in the sky and a temperature of 21 degrees and this was at 9am with the race starting at 10:15 and it didn’t look like it was going to get any cooler.

So at 10:14 the race Marshall gave his brief and mentioned that the temperature was now 24 degrees and they’d added an extra water station, PHEW

I said to Lauren, just do your best and I’ll come back to you when I’m done.

10:15 off we go, a mass stampede past the football ground and up a gentle hill to start with.

I found myself up with the big boys after the first 2 miles and then wallop, the Humidity and heat got to me and found it hard to breathe then it was an almighty struggle from then on whilst thinking if I’m struggling then how is Lauren going on???

But I persevered on and really thankful for the extra water station they put on. The race in parts reminded me of Liversage Half Marathon having to dodge cars and crossing main roads.

Eventually I finished the race in an official time of 54:03, gutted to say the least of that time.

So back out I went to find Lauren, I found her with 1 mile to go and she had the biggest smile on her face as she knew she’d nearly finished

She finished in 1hr14, which is pretty good for anyone in a 10k race, she loved it she said and actually said she might do another 10k?????

So even though I was gutted on my performance, things were made better that Lauren had done brilliant in her first ever 10k and made me a proud Dad.

Overall it was a good day and everyone who raced enjoyed it and of course we’ll be doing it again next year.

The race was won by Mark Willis in 39:07 and first female was Tiffany Partridge in 48:56 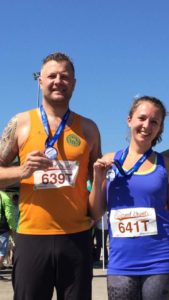