So when I saw that there was a chance to do a British Masters 10K not too far
from home with added hill I forgot that I don’t like road running and applied.

The background to this race is that I’ve been gradually coming back from knee
surgery in December 2016. With support from Stu Hale from Accelerate, Smiley
Paces and more recently John Rothwell of Virtual Harriers and my new running
club Steel City Striders and particularly Mick Wall, I stepped up the intensity of
my training and decided to put it all to the test.

Trentham 10K is an established hilly road race (around 560’ ascent) from the
village of Tittensor near Stoke on Trent. This year it incorporated the BMAF
Championship.

The recent spell of very hot weather meant that conditions were sticky and
uncomfortable from early in the day. By the time the race started at 10:30 we
were up in the high 20’s.

I followed advice, doing a good warm up, getting as close to the front as I could
and repeating the mantra that I can win this one if I want it enough. The first
couple of miles was uphill. This gave me an advantage since I spend much of my
training time on hills, who doesn’t in Sheffield after all? I pushed myself hard to
the summit and allowed the first descent to aid my recovery. My lungs were
bursting and salt water stinging my eyes constantly. At 3 miles was a water
station, which I decided to avoid. Even in the heat I knew 10K is doable without
added water.

Once the initial and main climb was accomplished I really just had to dig in and
keep my age group competitors behind me. That was hard as there are a few
very good athletes in my age group, V65 who would have much more experience
than me. I counted off the miles, breathing hard and squinting in the dazzle from
the sun. Towards the end of the race a tractor , trying to turn up a lane left me
disorientated so I almost went with it, losing the finishing funnel. A few more
seconds of error would have been disastrous.

I finished in 49:30 chip time, as BMAF V65 winner and gold medallist just 12
seconds ahead of my nearest rival from Worcester AC. and 3 minutes ahead of
friend and rival Yvonne Twelvetree of Totley. My knee held up well and I have
recovered quickly which is just as well since I have a 30K race, Sierre-Zinal in
Switzerland to look forward to next Sunday. 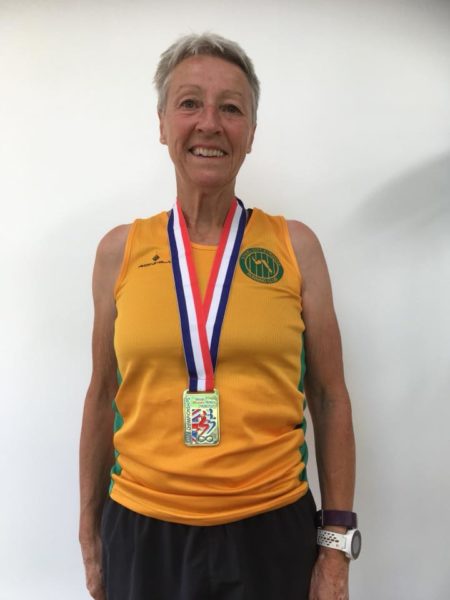 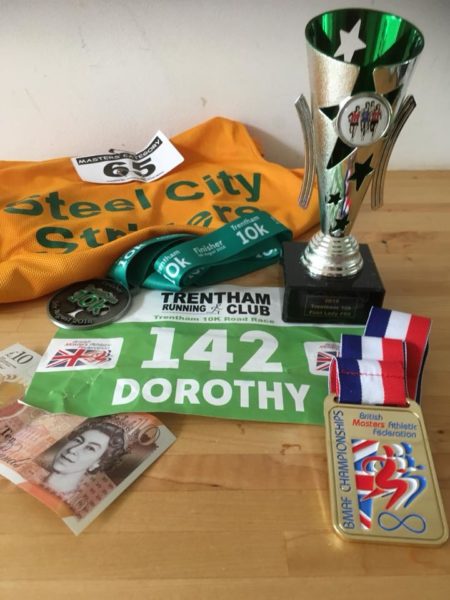