I’m not one for entering a lot of events, but I’d set my sights on the Burbage Skyline Fell Race this year, so that is what I did on the evening of 8th May, along with 33 other Striders and about 300 others. After a scorchio bank holiday weekend I think there was general relief that the weather had cooled down for the race; we had clear skies and great conditions.

It was notably The New Route, but for me, never having done The Old Route, this didn’t mean too much! It is a CS category fell face, 5.7 miles (9.2 km) with about 600 ft (185 m) of climb, taking in Burbage Edge, Higger Tor and Carl Wark with plenty of ups and downs linking those features. (Interestingly (?), Strava reports offer total elevation gains of between 950 and 1150 ft for the runners I’ve noted; I’m not sure how we could differ by 200 ft across those miles, but I guess some people do gratuitous hills?! Ben Clithero!)

Anyway, the New Route was designed, I think, to minimise the impact of hundreds of runners on the local wildlife, and we were warned to circumnavigate highland cattle if necessary, and that the route might change if Ring Ouzels were found in the area. In the event, neither cattle nor Ouzels were about, so the run was as planned, well marked and marshalled by cheery folk to make sure corners weren’t cut and runners weren’t lost.

I was a little nervous at the outset, not much used to racing, but I soon found familiar faces, expected and unexpected, had a chat and a jog before the start and forgot about the nerves. There was a great buzz and an encouraging atmosphere. I had nothing to prove, nothing to loose, and here I was in a beautiful place out to enjoy myself.

The race starts along the track at Burbage South, allowing the field to spread out a bit before the route heads up to the top of the edge; as far as ‘race strategy’ went I had a basic plan to not go out too hard but to properly get going once I’d got to the top of the edge. So when I did get up there and start to gain some ground I felt great; I really enjoyed having people in my sights to hang on to, and I know I was pulled along by the chase! So this was the racing aspect!

There was plenty of support out, families and fellow runners, including Striders, who popped up several times on the course to cheer and shout and photograph, and remind us to breathe, out and in (thanks Paul Stuart!). For a while, along Burbage edge towards the north end and then heading across to the Higger Tor climb, I was running close behind a Totley AC runner called Clare, so I totally got the benefit of the named cheers and shouts aimed at her; thanks Clare and supporters!

Now, Simon Wiles said it was definitely more up than down, and Rob Davies reckoned it was all up… but I say were they not concentrating?! I loved the downhill bits, and I managed to catch up a few people who had passed me on the ups. I sunk into the bog up to my knee at one point on the way down, like you do, and just at that moment the runner in front yelled with glee, “this is what it’s all about!” and made it so. I never did catch Clare from Totley, but I did manage a bit of a sprint finish, and loved that many of the quick folks were there at the end cheering us all on. I had a brilliant time doing Burbage Skyline, and as far as I could tell, I wasn’t the only one who did!

The race was won by Nathan Lawson, a youngster (U23) from Dark Peak Fell Runners, in 38:09. First lady home was, of course, Striders’ own Caroline Brock, in 46:15. (She modestly said to Goldstar that she was getting better at the downhills… watch this space, people!) First of the Striders men home was Louis Wood in 44:42. Nicola Rafferty was first W50 in 58:40. 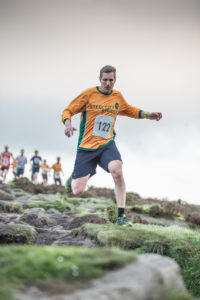 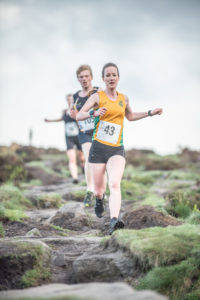 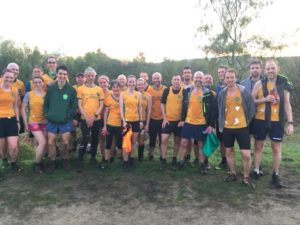