This is the saga of my first half marathon!

It was my third attempt at my first half marathon. I signed up to two last year, but had to pull out of the first due to injury and the second due to illness. As Sunday 4th March approached, the Beast from the East was in full swing, and it looked doubtful as to whether I would be able to get down to Cambridge, or whether the event was going to ahead. I wondered if maybe I was destined never to do a half marathon. I checked the weather and trains down to Cambridge every half hour or so ; the forecast was constantly changing, putting me on tenterhooks. On the Friday night I checked the event’s Facebook page. It looked like the event was going ahead as planned, but there were lots of people saying that it needed to be cancelled due to safety issues and it was crazy that it was going ahead, etc. So, I packed my bags ready to get my train down to Cambridge on Saturday morning.

I woke on Saturday morning to a fresh dusting of snow, but it looked like the trains were running so off I went. My train was slightly delayed, but I was finally on my way… until I got to Nottingham, where the train terminated. I called my friend, Sian, who was driving down. She was somewhere near Birmingham. Maybe if I could get to Birmingham somehow, I could hop in the car with her, I thought. Thankfully, however, after an hour or so another train arrived and I was on my way again.

Sian came to collect me from the station, and after going out for dinner (obligatory carb-loading at an Italian restaurant), we had a night in watching Laura Muir take silver in the 1500m.

It was a cloudy and damp start on Sunday morning, but there was no snow or ice to be seen. Cold, but not as bitter as it had been – perfect running conditions for me. We arrived at race HQ for a 9:30 start, along with the 7,000+ other runners. I told Sian that I would just be happy to complete my first half marathon, but secretly, I really would like to do it in under 2 hours. Sian (a Macclesfield Harrier) was meant to be starting two waves ahead of me, but moved back into my wave so she could pace me to my sub-2 hour. It was a fast and flat course and Sian gave up an opportunity for a massive PB just to support me through my first half marathon. True friendship right there (thanks Sian!)

At around 9:40 off we went. I was just so pleased to be there that I wasn’t even nervous. The first three miles took us around the city. It was my first time in Cambridge and I loved the running tour, seeing the grand colleges, cute little shops, and narrow cobbled streets. There was loads of support in the city centre and the first three miles flew by.

At mile 3 we left the city, and headed out towards Trumpington. I think it was around this time that I caught up with the 2 hour pacer. We chatted for a while, but he said we were going a little fast so he held back. I was still feeling strong, so I went ahead.

I enjoyed miles 5 to 6 which was quite rural with quaint thatched cottages and beautiful views over the River Cam. By the time I got to mile 6, I was still feeling good. I didn’t want to look at my watch, but Sian said we were doing well and had a decent buffer. We were still comfortably on track for a sub-2, and had been chatting all the way.

We then started heading back towards the city. Miles 8 to 10 were less exciting, although we did have the excitement of an incline! I felt quite smug as a few people stopped to walk up the ‘hill’ and I powered on up what I considered to be a gentle incline.

By mile 10 we were getting close to the city centre again and there were shouts of “only a Parkrun to go!” Up until this point, I had felt absolutely fine, but I started to flag here. It did help thinking it was only 3 laps of Hillsborough Park to go. Sian said we were still doing really well for a sub-2 and, by the time we got to mile 11, she said that if I could maintain my pace, she had a new goal for me. I wondered what it might be – sub 1h59? The last couple of miles were a bit of a struggle, but I could feel myself running faster, carried along by the encouragement of the supporters who were lining the streets of the city centre. Then, the end was in sight and I crossed the finish line with a smile on my face. I turned to Sian and just said “I did it!” I was so happy just to have finished my first half marathon; something that I had thought was never going to happen. I looked at my watch and I’d done it in 1:54:25.

7,042 runners finished the race, including two Striders. First male was William Mycroft (Enfield and Haringey) in 1:07:03 following the disqualification of the ‘wrong-name Cambridge Half Marathon winner‘, Jack Gray. First female was Georgina Schwiening (Cambridge and Coleridge) in 1:15:32. First Strider was Chloe Haines, who finished in a brilliant time of 1:35:00. 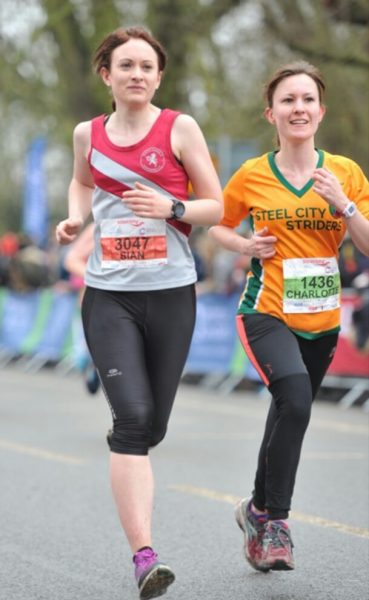