This was the 17th running of the Derby 10k, an annual road race organised by Sporting Futures, a local Derby charity helping young people from the area into sport.  Start and finish is Derby Football Club’s Pride Park Stadium, from where runners head into the city centre, passing The Guildhall, Silk Mill and Derby Cathedral en-route.  There’s also a 3k later on in the morning, which 10k participants can enter for free afterwards, should they so wish. 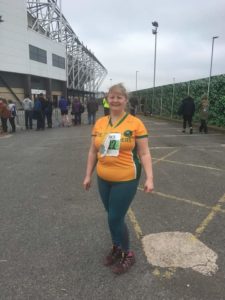