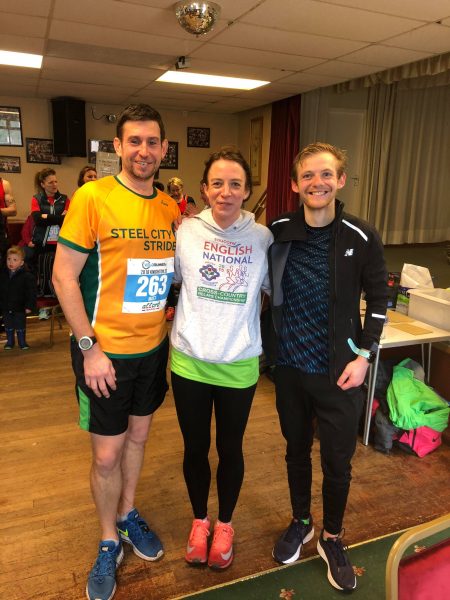 Tom has the broadest grin but he didn’t run the full twenty .

Knighton 20 is an undulating rural three-lap 20-miler. It’s a perfect tune-up race for Spring marathoners and early enough for those opting for marathons other than VLM. For those doing Manchester and Rotterdam for example, it’s ideal.

It’s a tricky race to pace since no single stretch is pan flat. That said, it’s a great ‘dress rehearsal’ for the main event. Valuable lessons were learned (don’t go out too fast and ignore those around you that do) and the race provided a gentle but firm reminder of the tougher end of the marathon. Jenny said that her legs had nothing left at the end and she just couldn’t get the winning lady . Even after twenty miles a few seconds is a chasm.

Three Striders made the trip over to race HQ in Knighton – an unassuming sports hall near the historic Shropshire Union Canal. Jenny Rich and Matt Gibson completed the 20miler and Tom Halloway completed leg one of the 3 x 6 2/3 mile relay, passing the baton on to work colleagues for legs two and three.

Jenny also broke the club record for 20 miles held by Mary Picksley for 25 years. Mary ran East Hull in 1992 in 2:16:30. The way the club’s times are heading at the moment, it’s doubtful we’ll be waiting another 25 years before we see this record broken again!

Jenny picked up honours as second lady but also, more importantly, being a Leek Lass, she is Staffordshire 20 Mile Road Champion 2018. Records may come and go and prize money vouchers will get spent on socks and the such like but gongs last forever.

To see how Tom got on, you may sift through this. Knighton 20 Relay Results 2018 An excuse for a Striders ‘coach trip’ next year? 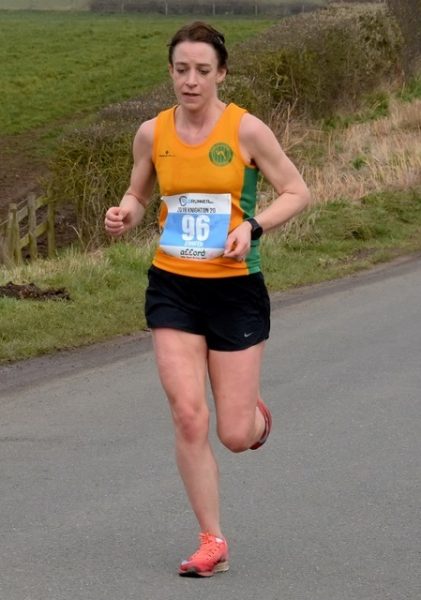 Concentration when it’s most need at 14 miles. Credit racephotos.org

There was consternation when Matt Gibson failed to appear in the results but an e-mail to race director Ken Rushton supported by photographic evidence had things fixed almost by return and Matt got his twenty miles in the Long Distance Strider. 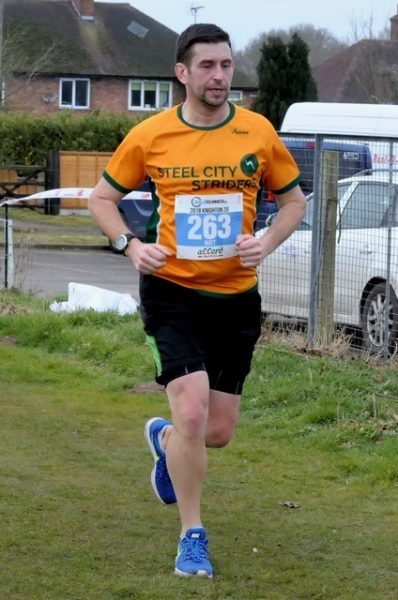 Matt powering over the line at the end of the last of his three laps. Credit racephotos.org.