Cleethorpes. The end of the line for many, but, for around 20 steadfast Striders looking for some late summer fun, it was more the start of the line as they took on the second-ever ABP Coastal Half Marathon. The town is well-known for its rustic east coast charm, fish n’ chips, donkey rides and anti-social behaviour. It’s also where the great John Hurt studied to be an actor and spent his teenage years so I’ll try to fit as many of his films in this report.

As one Strider remarked, Cleethorpes hasn’t changed since she went as a kid (probably in 1984) but there was plenty of offer on a flat but challenging route, on a windswept and sunny day. After the race got under way with one of the loudest klaxons ever, louder than an elephant, man, the 2,000 runners were taken through the Brexit-esque Thorpe Park Caravan Park and on to the first of two long and uninspiring trails through a field, following the flat and some would say alien landscape of north-east Lincolnshire.

Watership Down it wasn’t as there wasn’t a hill in sight. After a long plod through the underwhelming village of Tetney and passed its one tourist attraction, the sewage farm, we were taken onto another long section of trail with a vast expanse of Lincolnshire ahead of us, populated by sand dunes, war bunkers, brutalist pipelines and probably the perfect place to plan a hit or an Oxford murder.

The last few miles had the wind mercifully on our backs and was the most interesting part, through the Humberston Fitties where Shipbuilding singer Robert Wyatt sometimes resides, on to a short section of beach and then a long beach trail alongside the Cleethorpes Light Railway towards the pier, once home to a brilliant Northern Soul night but now home to a free ice cream and fish and chips. That was a proposition too good to refuse. It’s a fantastic but challenging course, and the elements played a big part in my own performance. It certainly gives you the full Cleethorpes experience, and is a course to let your imagination run riot. The perfect Sunday Strider session.

The race was won by William Strangeway of Lincoln Wellington AC in 1.10.47. The Ladies race was won by Charlotte Ward of Hallamshire Harriers in 1.24.23. Well done to all participating Striders. 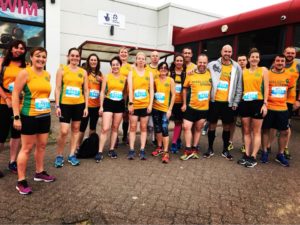