In 1996, Ian Holmes, of Bingley Harriers, then aged 31, set the course record for the Coniston Fell Race – 1:03:29.  For a race of only 14km this may seem rather pedestrian.  But, when you factor in 1065m of ascent and what the course map describes as the “best (worst?) finish of any medium race bar Ben Nevis”, his time is remarkable.  In the same year, Ian was English and British fell champion, a feat he repeated several times thereafter.

The race begins steadily, but after a few hundred metres begins the 700m and very direct ascent of Wetherlam, from where a sharp left turn sees the route drop down to Swirl Hause and hence the ascent of Prison Band, in places a rocky scramble, to the high point of Swirl How (804m).  From there almost 3km of glorious running along broad grassy ridges leads to Coniston Old Man (803m).  Sharp left again, and the racing line takes a direct, very steep and thigh crunching pathless descent, dropping about 500m in less than 1.5km, followed by a slightly gentler fast 1.7km or so run in to the finish.  It’s a fantastic route, with stunning views, over three proper Lake District hills.

The 2018 version of the race was run in superb conditions and attracted 247 runners.  And the winner?  One Ian Holmes, now a v50, and self evidently still in fine form.  His time this year, 1:15:22 may have been slower than his record, but was still more than five minutes faster than the second placed runner.  The first woman was Sarah Pyke, v40 of Black Combe Runners in 1:38:22.  I was a little (!) further down the field:

I’m still suffering the consequences of the descent.  And it could be argues that a 275 mile round trip to run a fell race is a bit excessive.  Wouldn’t have missed it for the world!

And the full results are here: 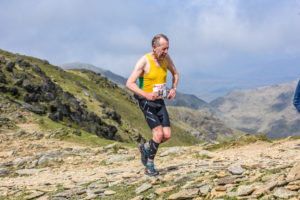 “not flattering, but at least I appear to be trying.”