Report by Rachael May

My partner Nick and I decided to give this race a try after some friends who were going suggested we come along too. So with about 6 weeks notice we decided to do our first international race.

Copenhagen is a lovely city with beautiful architecture and a chilled out Scandinavian atmosphere. We arrived on Saturday morning and went to the expo to collect our race numbers. We had a quiet evening and limited ourselves to one beer (partly due to the race, partly because of the cost of beer in Copenhagen!).

The half marathon is a large event attracting 22,248 runners from 115 countries. There is a strong elite group, however the GNR and Berlin Marathon had attracted some of the big names. The route is on wide tarmac roads through the city and is very flat (119m elevation gain and a maximum elevation of 20m!!). It is almost like running a sightseeing tour of the city.

The race was well organised, and although obviously busy at the start the queues were no worse than other events I have been to. I think I have spent the same amount of time in the toilet queue at Trunce, and longer at Sheffield Half!

The race started at 11.15am, I was in the 1.45-2.00 wave, crossing the start line 8 minutes after the elite wave. The weather conditions were perfect, sunshine and cloudy with a pleasant breeze. Crowds lined the whole route so there was no point where the support wavered. At least every kilometre there were DJ’s, choirs, rock bands and entertainment to keep you moving. There were ample water stations around the course which offered water, energy drinks, fruit, cold water sprays and toilets. The atmosphere was brilliant all the way round.

The route is said to be one of the fastest in the world, so I had a PB in mind. My previous PB was 1.54 so I set my sights on a sub 1.50 finish. It was only my 3rd half marathon so I was aware as a novice not to focus too much on a specific time. I also didn’t get to do much training before due to an incredibly busy summer and only entering 6 weeks prior to the race. I knew that my sub 1.50 might not be achievable but my main aim was to enjoy it.

I had worked out the kind of pace I would need to break the 1.50 barrier and managed to maintain the right pace all the way round. I was flagging a bit between 10-15km but had a gel and pushed on. I pep talked myself the whole way round “your breathing and heart rate are fine”, “your legs feel good” “nothing is hurting” etc. Because I didn’t know the route and it was so flat I found it hard to break up the race, it just seemed to go on forever and I was missing the hills!!

I did become a little fixated on the km markers, checking my watch and doing calculations in my head. As I passed the 20km marker I realised my watch and the road markers didn’t match and was further from the finish than I thought. Looking on strava after the race, everyone seemed to do between 21.2-21.6km rather than 21.1. I’m sure the course was measured correctly so I don’t know if it was inaccurate watches or having to take wider lines to avoid crowds and weaving around people that added on the extra distance. Anyway, as I entered the final section I realised I was going to struggle to make the 1.50 cut off. I pushed as much as I could. The finish is up a long straight road and I could see the finish line in the distance, but my watch had already ticked over to 1.48. I couldn’t gauge how long the final stretch was going to take so just pushed as hard as I could and managed to cross the line in 1.49.29. It was a much tighter margin than I had calculated on the way round but I did it.

I finally achieved my goal of being first Strider home…. even though I was the only Strider there!

The race was won by Daniel Kipchumba of Kenya in 59.06.

The first woman home was Sifan Hassan of Holland who completed the course in 65.25 breaking the women’s European Half Marathon record.

It’s definitely a race I would recommend, and a lovely city, we stayed Saturday until Tuesday meaning we had a few days to enjoy afterwards. 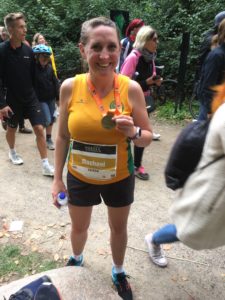