The Derbyshire village of Crich is probably most well known for being home to the National Tramway Museum. However, also worthy of attention is the annual Crich Monument Race, which takes place each July, on the weekend of Crich’s summer fete. As I understand it, the race was added to revive the fortunes of the village’s fete about a decade ago, and has slowly grown; this year it was sold out some time before the event date.

The Route is very scenic and mainly off-road which starts at the Crich Fete green, along Coast Hill, across the Tors to Hagg Hill, down through Crich Chase to Cromford Canal, through to Whatstandwell, up to Wakebridge before scaling the Monument hill and then a fast descent to the Fete green. This route is a real challenge for Fell, Road and Trail runners, the race distance is approximately 11.3 Kilometres including 1000 feet of climbing. It also makes for a fairly unusual race profile.

I found the race a tough challenge; the race starts at 1.30, and that meant it was run in fairly unforgiving heat. I’d also competed in the Striders 10k the previous evening. The downhill section at the start is fairly technical in places and, after a fall at the recent Oughtibridge gala event, I took it very cautiously. The climb to the Monument at the back end of the race is also fierce; most of the field was reduced to walking at some points, myself included. The final descent back to the village is a welcome respite. All finishers were rewarded with a banana and a bottle of locally brewed beer. All in all an excellent, if challenging event; one that more Striders might want to look at next year, fans of fell and trail would definitely enjoy it.

The first male finisher, and breaker of the course record by over a minute, was Dan Haworth of Kewsick in 40:23. The first female was Eleanor Lunt of Long Eaton RC in a time of 52:28. 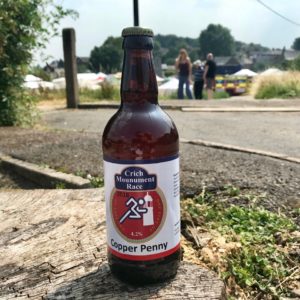