“What is the Crosspool Crawl?” I hear you ask. “It must be in Crosspool” you cry! Nope! The Crosspool Crawl is a (smidge over) 4-mile multi-terrain race in Lodge Moor starting at the Three Merry Lads and ending at the Sportsman. It starts with an undulating two miles on the reasonably quiet Redmires Road, before entering the trail around the three Redmires Reservoirs. There is then a flat dash along the gravel Conduit footpath, finishing with a sprint across a grass football pitch to the finish line.

2018 was the third iteration of the race, and was by far the driest to date. Where before there were bogs on parts of the trail, this year the ground was rock hard, baked as it had been by three weeks of hot weather and almost continuous sunshine. Midge count was, thankfully, slightly down on previous years, however thunderbug numbers were up MASSIVELY and they found gold and green particularly attractive.

The race is a fundraising event organised by the Friends of Lydgate Association (FOLA), the parent teacher association for Lydgate Junior School in Crosspool. Apparently the Head Teacher of Lydgate is a member of the Striders, but he is fairly quiet and unassuming so you may not be aware of him. Stuart Jones, or “Mr Jones” as this parent of a former pupil of the school cannot help but call him, was prominent at the Crawl, and armed with his trusty vuvuzela called the Striders to action for a pre-race photograph.

Stuart was joined by a further (at least) 28 Striders for the race which saw a record 143 runners complete the course. It was a hugely successful evening for the club, with Ashleigh Barron 1st lady and Kim Bateman 3rd lady. In the men’s race Ben Jones came in 2nd and Steve Canning 3rd.

Clubs weren’t recorded in the results so I’ve done my best from photos etc. 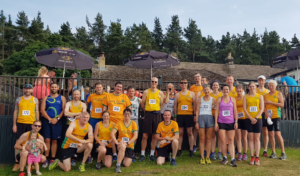