Another biblical downpour was forecast to hit us during the couple of hours we would spend in and around Curbar. Thankfully, the ‘experts’ were wrong once again and we had a suffer a fine drizzle at worst but mainly we had pleasant fell race running conditions.

This race was a stinker for me last year, mainly through my own excesses, and a trip out on Friday night including a brief chat to Mr Buckman in the Broadfield loos, meant that once again, my preparation for a 10 mile fell race was perhaps not the best.

Curbar Commotion is a very runnable fell race with very few, if any, really steep climbs so the runner never gets that real opportunity to ‘take a breather’ whilst walking up the hill. The first 3 or 4 miles is just a steady uphill pull where I was able to keep ahead of Rob Davies. However, the next 6 miles or so undulated and he passed me for the first time with one of his trademark windmill descents down a steep decline, after being so willingly encouraged to do so by Nigel Barnes. For every uphill that followed I was able to catch him and pass him and for every downhill, he was able to do the same to me and sadly for me, fell races tend to finish on downhills…

Fell races can be great fun but, like all sports, hold an element of danger and risk. Sadly, a couple of Striders took a couple of nasty tumbles today. Al Cook was admiring the view during his run and a second later he was admiring the blood coming out of both of his knees, whereas Lucy Broom took a bit of a bigger tumble which involved a facial injury as well as cut, grazes and bruises. Thankfully no serious damage to either and here’s wishing them a speedy recovery from their injuries. 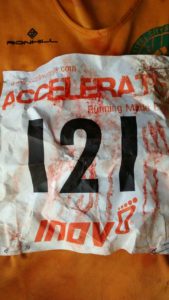