Cusworth is yet another of those places near Doncaster/Rotherham I’d never heard of till there was a race. This one starts in a country park/former stately home, and runs a large lap-on-a-stick around (partially closed) country roads. The whole thing has less than 100m of ascent and is definitely a potential PB course. After chatting to some of the large Steel City Striders contingent, lured by the race being part of this year’s road race championship, I set off fast but not hammering it, memories of running out of steam at Wickersley on Saturday fresh in my mind.

After a couple of kilometres just outside 45-minute pace I was wondering whether maybe the elusive barrier was in sight, but my legs just didn’t have the spark. I spotted fellow Strider Kim Bateman a few places ahead and went into emergency “use a Strider as a pacer” mode. About 8km in I managed to catch and briefly overtake her, and threw myself at the sneaky hill round the 9km mark (I hadn’t been expecting that!), but she soon hurtled past me again and deservedly finished well ahead.

A free Snickers bar and a dayglo orange (long-sleeved) t-shirt and it was back to the car, parked in a field for the umpteenth time this summer, and home. All in all a good race, which boosted my self-confidence and my lungs. Definitely worth another go next year. Along with Dewsbury and Askern it’s probably my best chance of breaking 45 before I’m 45…

If I’d have been in better nick I could have got a PB here. But I wasn’t. I’d raced the day before and I haven’t been breathing particularly well. Not to worry though – I still did better than expected.

Apologies for lack of positions for Striders, the results don’t play nicely when filtering by club. 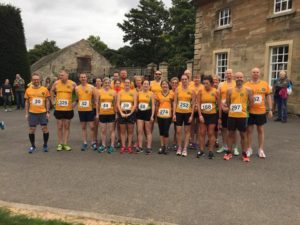