This was my first attempt at the Damflask relays and I wasn’t sure what to expect.  It turned out to be an amazing experience!

The men’s teams are made up of 4 with the exception of the M60 category, which is 3 people, as are the women’s teams. Each runner does a lap around the Damflask reservoir of 3.5 miles (plus a few metres!).  The route starts with a gently undulating and almost flat run down one side of the reservoir (for those that know the Percy Pud route it goes from the Plough Inn to the bridge).  It then goes across the bridge and up the hill on the other side of Damflask. This hill goes on for quite a while, although not too steeply. The final mile is a glorious downhill back to the changeover area.

The changeover area is a sight to behold, and I think my best description is organised chaos.  Incoming runners finish on one side of the road whilst the outgoing runners wait on the opposite side. Marshalls down the road shout which teams’ runners are nearing the finish so their next runner can move to the start area. The starter sets them off once he sees the incoming runner finish. The starter is continually shouting instructions to people to keep all runners in the correct place.  With the difference in speeds of the various teams, there were people on second, third or fourth laps all coming in intermingled.  I’m not quite sure how the organisers managed to record everything that was going on at the finish to come up with a set of results, but they did!

All the local clubs had put together a few teams but the green and gold was out in force, there were so many of us!  Everyone who ran a leg did brilliantly, irrespective of their time, because it was their best effort on the night.  A special mention to Nicola Birch who stepped up to our ladies first team on the day and the F55 team who came first in their age category (Jane Evans, Helen Eberlin and myself).

John Kilcoyne had the hardest job as he had so many teams to sort out and then juggle at the last minute when people dropped out. Thanks John! 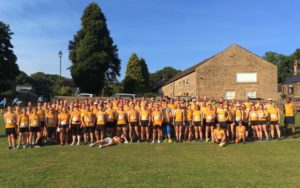