For some runners, getting up early to go for a run in the rain and cold is a daunting prospect. When the run in question is 30 miles around the Peak District taking in some of the toughest hills with the weather forecast saying it’s going to chuck it down all day, that was going to test even my resolve to get up and go out.

The route is 30 miles with just shy of 2000m ascent and takes in some of the larger, well known hills and areas of the Peak District; Win Hill (twice), Mam Tor, Lose Hill, Kinder…. the list goes on. Apart from the first 0.5km or so, the race is all unmarked. You either have to navigate yourself, know the route or adhere to the usual race tradition of following someone else.

This was also to be my first Ultra, Snowdon in July was more than 26.2 miles but was advertised as a marathon so was a bit nervous but thought I had trained more than enough over the previous couple of months. I’d decided to go with my usual fuelling which has served me well for other longer races and training runs up till now; homemade flapjack and Mountain Fuel mixed with water. I also took some Jelly babies and a couple of gels along just in case, but I never seem to use them.

I met up with the fellow Strider Heather and the other runners at Hope Sports club for registration and kit check. It was the first time I’ve had every bit of kit checked, down to the amount of charge on my phone. It’s pretty understandable really given the forecast and for the most part, you’re out there on your own.

Praying to the weather gods to have a change of heart seemed to have worked and as we lined up for the briefing with 5 minutes before the start the rain slowed.
I decided to run with my waterproof jacket on for a bit to see how the weather would pan out, I knew we had the first of many steep climbs early on and walking up a steep hill is a perfect time to adjust ones walking wardrobe. As expected I ditched it as soon as it got too steep to run.
At this point I started chatting to Carl, originally from the Midlands but who’d been living in New Zealand. He had recently taken part in UTMB, failing to make the finish line but putting in a valiant effort never the less. As we progressed over to Stanage we were joined by Alex, a local who I would end up staying with till the end of the race. The three of us stayed together until just before the half way point when Alex and I pulled away coming back up Parkin Clough. From then we ran on together and by the time we came through Edale, the runner who we had been told was in 3rd place was tiring so we passed him and on we went. It was strange having a conversation about finishing with about an hour to go but we’d decided to cross the line together as we’d ran most if it together. As we started to descend Lose Hill down to the finish my joints started creaking and each step brought a slight grimace. I kept going and despite some locals deciding to remove the tape sending us on a bit of a wild goose chase to find the finish line, we crossed the line together, finishing joint 3rd in 5:36. Heather came in shortly after to bag ladies 3rd place and make it a good day out for the Striders in attendance.

I was over the moon with that time, before the race that would have been my ultimate target time, but never having ran the distance before I just wanted to get to the finish and see what happened.

Well done to Peakrunners for organising a great race and for finding another voucher and swag so Alex and I didn’t have to share the massive bobble hat!! This is definitely on the list for next year!! 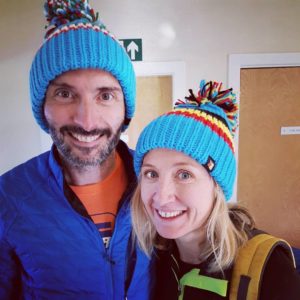 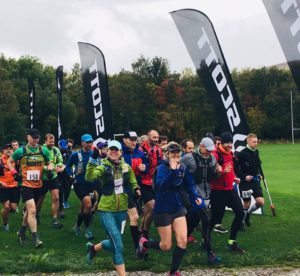