Another fine report from our overseas correspondent.

This was again one of those lovely, friendly, local races with multiple distances that I love to take part in when I go back home. I am not sure if it’s the relaxed atmosphere, the routes through the countryside, the rich feed station at the end, the possibility to sign up on a day for a mere 2 euros or a mix of those reasons that make them so appealing to me but I sure think it’s something that make your Sunday! You don’t really arrive with many expectations to those little local races; however parking was smooth with clueless marshals looking a bit lost but we only arrived 40 minutes before the start and we had a spot about 100m from registration and toilets and only 200m from the start; there is no baggage storage but you need a car to reach those little towns anyway so you store your items in there; registration was quick with two option: 2 euros for just the feed stations or 4 if you wanted to integrate with a 500ml bottle of a tasty local beer, Menabrea; there were quite a few toilets available (as well as showers afterwards) as it was by a sport centre so that wasn’t an issue either and with 3 distances to choose from (6.5km, 10.5km and 19km – which were measured by my TomTom as 18.5km) a bunch of us decided to go. 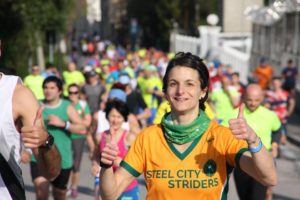 The 19km race started at 9am and the other two followed at 9.10; the longer route splits from the other two at around 3km but all the routes were beautifully leading through the small and pretty city centre of Motta, peaceful countryside roads and along the river Livenza, it was on road as well as off road and I considered it flat (even though my friends might say there were more than a few welcome bumps here and there).

There were three bands (whose members were between 10 and 14 years old) entertaining runners along the routes and the general atmosphere was fantastic.

To top it all it was a fantastic spring day with blue sky, warm sun and birds singing J about 20 degrees and YES perfect running condition if you have to ask me =P

At the final feed station you could find the traditional Italian Easter cake “Colomba” and rolls with different kind of cold cuts and/or cheese, water, tea and sport drinks and the cherry on top of the cake were the freshly fried fritters (superyummy!).

2700 people took part: the 19km male winner was Roberto Graziotto and the first female to cross the finish line was Marinna Bedini but times are not stated in the official results.

but to clarify the results don’t exist; there is nobody taking times so they only take names of the people that are registered with a bib number to run all the races of the circuit. No time, no medal, no t-shirt, no hassle

I am pretty sure I was the only strider there and I very happily completed it in 1h 28’ 9”.