Report by Rachael May

The Dronfield 10K was originally scheduled for March this year but was cancelled due to heavy snow. The conditions couldn’t have been more different on the new race day. England was still enjoying the long heatwave, making for a particularly hot race.

The race is two large loops around the town of Dronfield, with an extra small loop on the first lap. Very few sections of the route are flat. There are long downhills… and even longer uphills! Although none of the hills are particularly steep, they felt like a struggle due to the extreme heat.

There were crowds of supporters all the way round the route, so although it was a hard run the encouragement kept us going. The race is a well organised community event.

Well done to all the 86 Striders who turned out, making up a large proportion of the 695 runners who took part. It was a fantastic turnout, and there were some great performances, especially considering the difficult conditions. 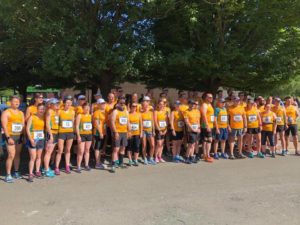 Lucy Broom was the first female Strider back in 42.51 and was 3rd Female to cross the line. Well done Lucy.

Arif Ali has written a blog about this race and breaking 50 minutes for the first time! Link here.

Ady Good breaking one hour for the first time! 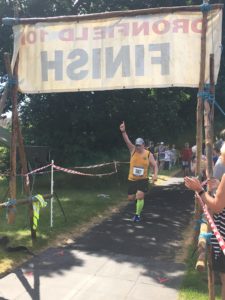