The 2018 edition of the Dronfield Relay marked a change in the organising committee. A big thank you goes out to Adam and Kate who have run the event for the last 4 years.

So, new organisers but same great event. For a bit of background here’s some text from the website….

The Dronfield relay is an annual team event for Striders and invited guests and always a great day in the Striders calendar. Each team is made up of 6 runners with a pair running together on each of the 3 legs of the course.

The race covers a total of around 15 miles through the countryside around Dronfield and Coal Aston with each leg being approximately 5 miles long.

A route map is available to help runners on their course reccies: route map in PDF format (6MB). It is a low key event with a focus on enjoying the run and socialising afterwards rather than cut and thrust competition.

So what did the 2018 edition deliver.

To start with, it was a record turn-out with 14 teams on the day. 6 of those teams were put together from Striders individual entries, 3 Striders ‘Unofficial’ Headtorch teams, 2 Striders / non strider Woodburn track teams, and 3 external teams with Totley, Sheffield Running Club, and Crookes Crocks joining us.

Team lists below – Apologies; Nettles, Rashes and Crashes, I have missed noting down one of your leg 1 runners (Split over two tables to fit it):

We gathered with the leg 1 runners and some other hangers on in Holmesfield around 10. I nabbed the one high vis with ‘Official’ on. I felt great and very important until Phil Howson started to take the piss (I still felt great really).

The sun was shining, and it was bloomin hot. The lush smell of suncream filled the air, and some people already looked a bit burnt.

After promising the leg 1 runners that I had run the whole route the day before and there was no cattle (there really wasn’t!) we set them off at 10:30 to some murmers and a few claps. We were off.

Leg 1 has a nice rolling profile, but also is often one of the most overgrown. Too hot for leggings there was nothing for it than to take the thistle scratches, nettle stings and long grass rashes.

Off to the end of leg 1 in Coal Aston. Amy’s Army took the controversial tactic of sticking their fastest runners on leg 1. However coming in in 37 minutes, it did do something to psych the other teams out with a decent lead already in their hands. A steady stream of leg 1 runners continued to come in with teams ranging between 37 minutes and 55 minutes. Many of them slyly noted the large number of cattle on leg 1. Again I protest my innocence, they were not there the day before. Potentially Amy’s Army moved them onto the route to try and get an even bigger lead.

It was the start of leg 2 where Sam Brown set off on his first of two legs for ‘Phasers set to Kill’ in the absence of Alex Shepherd due to illness. I heard rumours on the grapevine that he was in the pub the night before. This may be ‘FAKE NEWS’ but I cannot say. Sam heroically stepped up to run both legs 2 and 3. Bravo!

So after leg 1 here were the rankings (times are in the results table at the bottom):

A fast start down into the woods, but on hitting the bottom it is a shock to the system as you start a long slog up through fields, woodland, and road before getting to the airfield. From here you can really let loose with a fast finish, before the final sting in the tail. There is a brilliant spectator finish as the runners come up the track to the main road. Always potential for a real ‘eyes bleeding’ photo snap at this point.

The results show some real battles on leg 2. Phasers Set to Kill had caught Amy’s army getting a 2 minute lead on them. To Infinity and Beyond had an epic run moving up 8 places in 1 leg. That is a lot of people to say hello to while passing! Other notable runs by Pates Pacers and Norton Forerunners. Headtorch A Team get the award for being the only team to stay in the same position…congratulations!

Leg 3 is widely reported to be the toughest legs and most teams (apart from Amy’s Army) put their fastest runners on this leg. A lumpy one to say the least, it has more uphill than other legs and a lot of long steady slogs through fields. If you have seen the heaven scenes in the film Gladiator, I think it is a bit like that, just without Russell Crowe. Due to the very hot weather, I think the leg took its toll on some runners with some tired looking faces at the end and some emergency jelly babies required from Rosa.

So what happened on Leg 3. Well it was very exciting and all change, and remember, we still had to apply the handicaps. The below table is without handicaps applied.

To Infinity and Beyond continued to climb the ladder, overtaking Amy’s Army and fellow track team ‘Phasers Set to Kill’ on the last leg to take top spot on time. Hal’s Angels had the best run of the leg. Someone set a rocket up their bottoms as they took 5 places against some stiff competition. Well done to Liam and Hal!

A word about handicaps.

Handicaps are applied on the Dronfield relays to give every team a chance of taking home the trophy. The Striders teams (Teams 1 to 6) were made up to be equal. We then handicapped the other teams that entered based on the Striders teams times. To do this we took the slowest runner on each leg, calculated the average 1km time (from the 10k times given to us) and multiplied this up to the 22km length of the Dronfield Relay route. This allowed us to apply a positive or negative handicap to the entered teams to make it equal.

A good close competition was had between all teams with the final handicapped time splitting the teams by just 17 minutes. The winner was kept secret until the prize giving in the Victoria Inn where a buffet and a few beers were had in the beer garden. Simon Bayliss took to the bench and put his loudest voice on (it’s pretty loud) to announce the results.

With a smashing climb of the ladder throughout the legs and a very consistent performance, ‘To Infinity and Beyond’ took first place prize. Second was the headtorch team ‘Reservoir Doggers’ although may be they should be docked places for the crude name. Third went to Hals Angels. Unfortunately we didn’t get a Charlie’s angels style photo of the team.

Special shout out for our only solo completer too. Sam Needham managed to run the whole route in a time of 2 hours 3 minutes and 36 seconds, a time that would have given him 3rd place overall. A smashing run in the heat.

Also, Dave, Emma and Zoe who set out for the full route too. The heat and a navigation issue thwarted the run, however a fantastic run and effort none the less. Well done!

And for those who like colours, here is a graph to show how places changed throughout the relays: 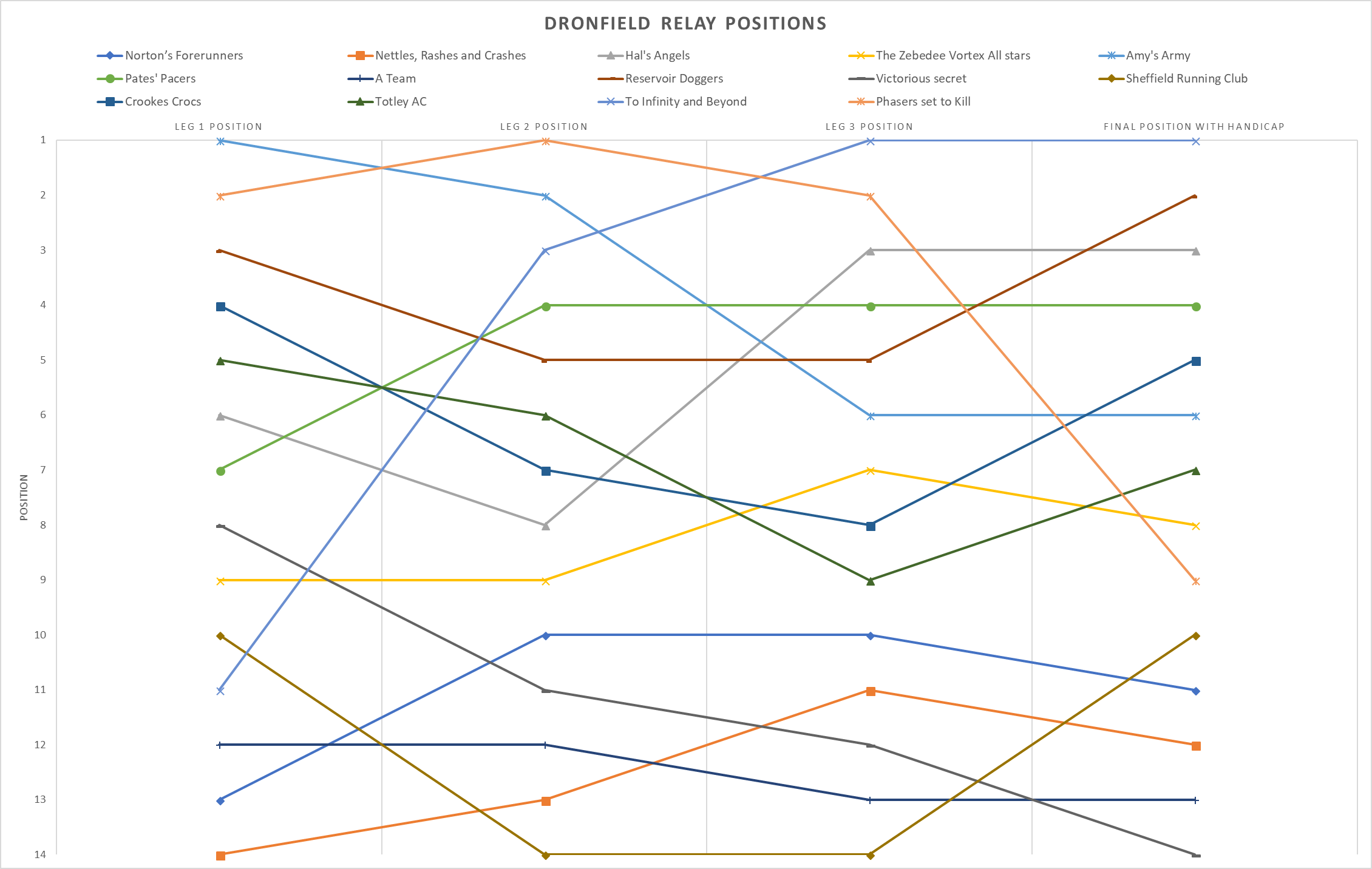 All in all much fun was had on a stunning sunny day.

A big shout out is also needed for all of the team captains and fellow team members who did so much in organising their teams, keeping in touch with us, sorting replacements and making organising the relays generally easy and great fun. And finally to the external teams as well. It’s great to be able to have other clubs like Sheffield Running Club and Totley along for a good social day. Thanks!

Any feedback / comments, please let us know at Dronfieldrelay@gmail.co.uk or via the contact page on the Striders website.

Simon, Rosa and I look forward to welcoming you all back again next year. 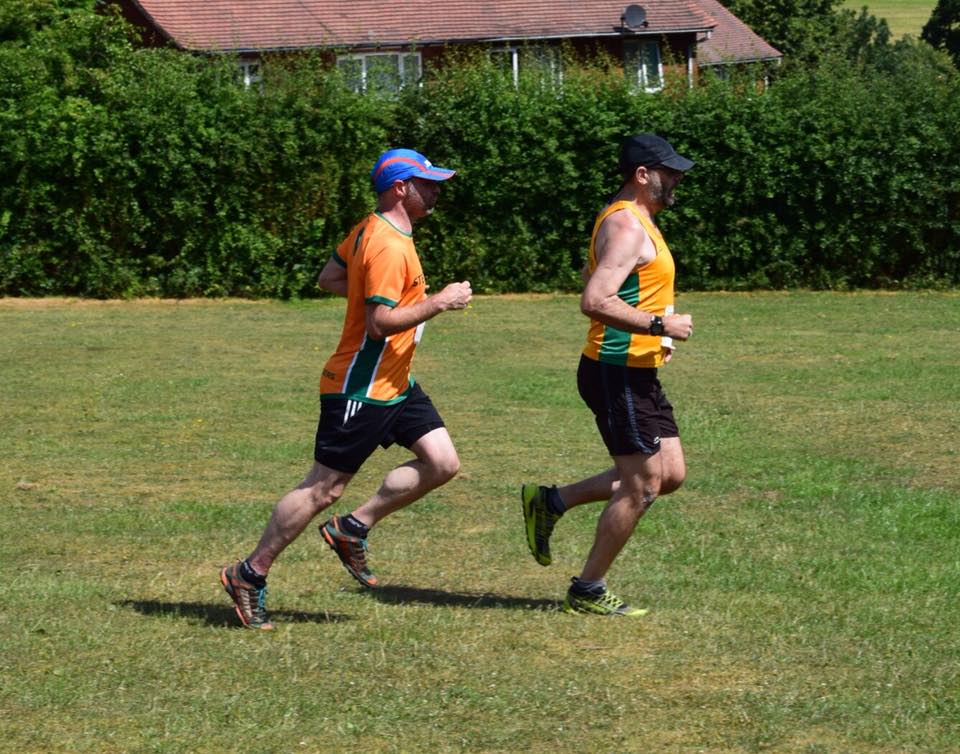 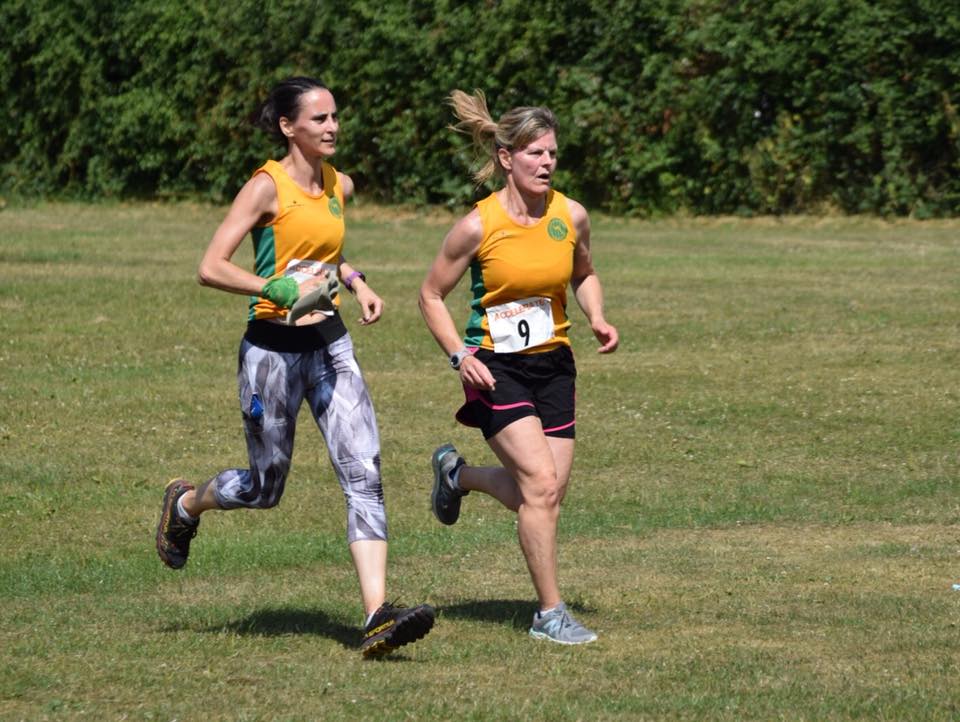 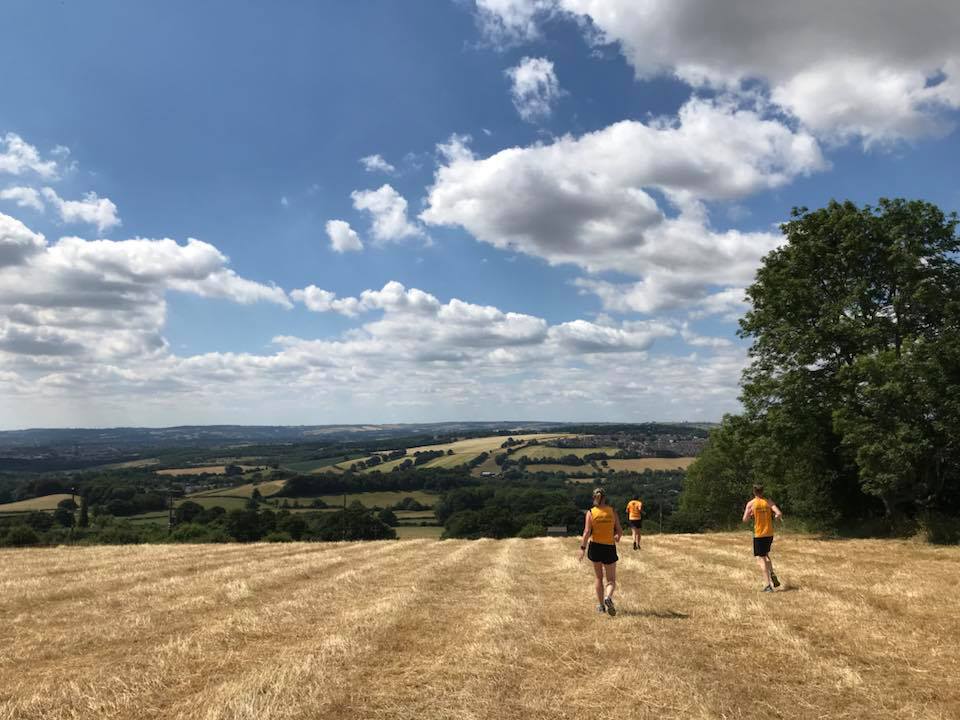 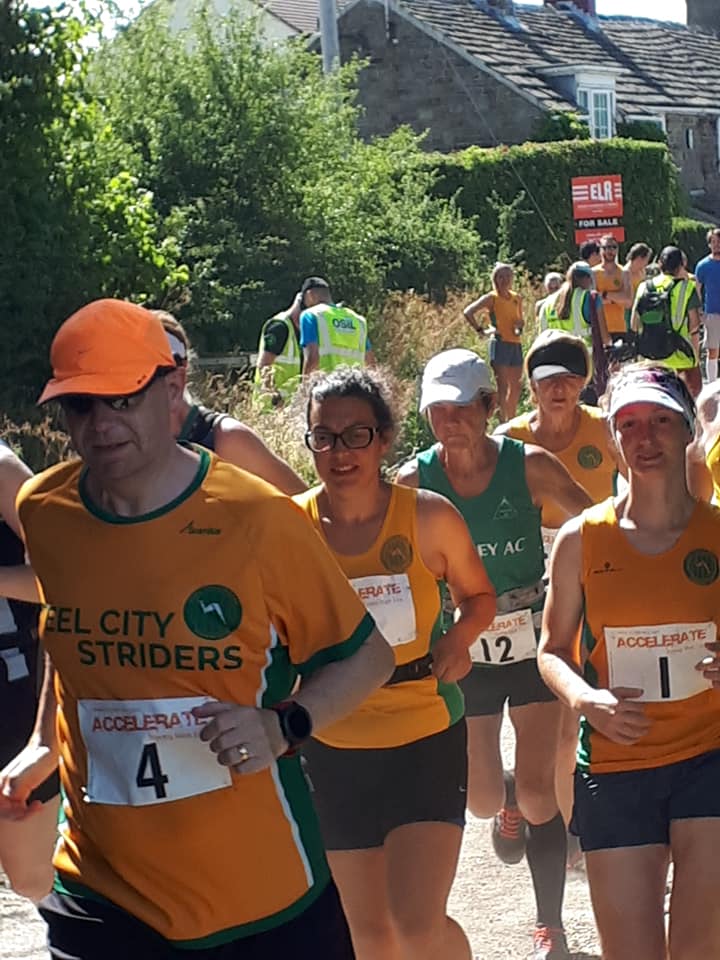