The East Hull Harriers 20 mile road race is billed as the ideal warm up for London and other Spring marathons which, in normal circumstances would be true, but come the scheduled race day participants were heading to their local gym to get their long run fix as the second Beast from the East hit the shores of the UK. Throwing carefully crafted marathon plans into chaos, the race was hastily re-scheduled for the following weekend and the flurry of transfers ensued.

If there was any doubt the race should have been postponed during the snow (there wasn’t) then the morning of the race proved to be the clincher – bright sunshine and still conditions greeted the athletes as they gathered outside the local college for the off.

The 20 mile course is essentially an out-and-back with a loop at either end, run exclusively on tarmac but taking in a range of surroundings, from city centre A-roads to farm tracks and disused railways. The route is pan-flat and in normal circumstances would be an ideal PB course, but when questioned most participants would agree that the sunshine made things a little difficult, especially in the latter stages of the race.

Post-race, after collecting a rather nice medal and commemorative 25-year anniversary buff hat, participants were treated to a splendid buffet of sandwiches, sausage rolls, quiche, jaffa cakes and scones – enough calories to fill a 20 mile-sized hole and more. The EHH team of volunteers certainly know how to put on an event, from the organisation and marshalling through to catering and goodies, and all at such short notice. Some of the bigger events organisers should take note.

The race was won by Michael Hargreaves of East Hull Harriers in a time of 01:53:10 and first lady was Susan Lewis of Roundhay Runners in 02:13:20, not too far ahead of second lady, our very own Sian Evans in 02:21:16, who fought an epic contest with third and fourth lady, leaving them just over a minute in her wake. Four other Striders made their way up the M18 for the race, so well done all! 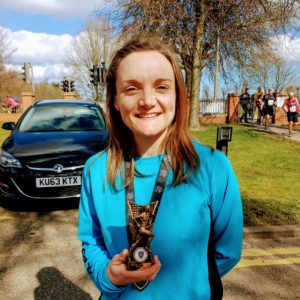