Edale Fell Race takes place as part of the traditional, long running Edale Country day, described as ‘the big, little country show’. As a result it is a fantastic event with a finish line in the grounds of the Country Day, and plenty of reasons to stick around for some music, beer and food afterwards.

The sun was shining yet again, with a near cloudless sky. The fell race route takes in 4.7 miles (although it feels longer!) with 402 metres of ascent. A fantastic and technical fell race route awaits, with a stinging start straight up the nab and the first section of ringing roger, before diverting up onto the edge. With the start being a good 10 minute walk from the registration you do need to get there in plenty of time. A couple of striders suffered, with Heather Wallis running up to the start line as the race started, leaving her with no break in stride. Sam Needham did one better in still being at registration at the 11am start. He reminded me of this when he still overtook me on the edge.

Back to the route. Once on the edge its a technical run along the path to the top of Grindsbrook Clough before a small ascent to Grindslow Knoll. You would expect a breeze on top but unfortunately none was to be found, making the heat of the sun pretty uncomfortable. It was a sweaty day, and that is an understatement. A steep descent off the knoll left some sore foot soles (ask Paul Smith for the picture of his feet!), before a fast finish through Edale village into the Country Day ground.

Finishers were cramming themselves into any shade that could be found to cool off. It was a fantastic atmosphere and a great event. Most striders stuck around for an hour or two afterwards to enjoy what was on offer.

The winner of the race was Joe Woodley of Sheffield Hallam University Orienteering Club in 34:38.

First female was Helen Thornhill of Buxton AC in 42:16.

15 Striders took part in the race. Special mention to Dave Perkins who carried a very heavy and full army pack around in the heat (and in marching boots just to make it extra hard). An impressive feat. Well done to everyone! 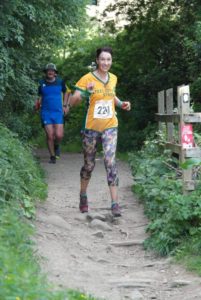