There was an impressive field of elite fell runners for the 2018 Don Morrison Memorial Edale Skyline as this was a counter in the English Fell Championships.  There had been some Facebook / FRA Forum controversy in advance of the race as Championship contenders had not set their alam at 00:00 midnight on 1 February to enter the race, but in the end many people on the waiting list got places and there were 413 starters, including a Striders contingent of six.
The race is about 21 miles with about 4000 feet of climb.  This year the traditional course was reversed in direction with an anti-clockwise loop of the Edale Valley (this was great as it gave me the opportunity to be in agony in different surroundings this year and to sit in mud instead of peat with the standard debilitating cramp).  We also got the benefit of good running conditions, avoiding the hypothermia and heatstroke cases that the race has experienced in previous years.
Starting on the grassy slopes of Grindsbrook Meadow, the route takes us up the zig-zag path to Ringing Roger, around to Grindslow Knoll, past the Wool Packs rocks to cross the Pennine Way near Edale Cross, over Brown Knoll on the recently-laid flagstones, then down Rushup Edge where the stringent two-hour cut-off at Mam Nick road crossing was extended by 15 minutes.  Then we climb along the ridge over Mam Tor, Back Tor, Lose Hill before plunging 300 metres down to Hope, only to face the steep climb up Hope Brinks to ascend Win Hill.  Some welcome support from Andy Buck and Dave Parry, plus an opportunity to high-five club mates as we passed on the path up / down the summit was a welcome distraction before a fairly gruelling run-in around Kinder and back down to the village from Ringing Roger.
The race was won by Carl Bell of Keswick AC in an amazing time of 2:37:13 and first lady Victoria Wilkinson of Bingley Harriers and AC in 2:59:34.
Some great performances were recorded from Striders – most notably Simon Bayliss and Amy Duck who came to the race fresh from completing the previous day’s 51km (1340m ascent) Haworth Hobble.
Striders Results: 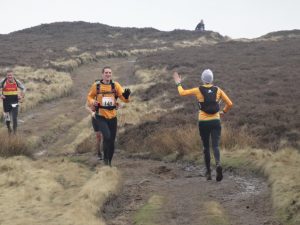 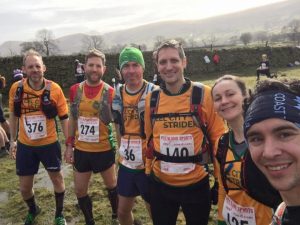