The EDF Power Surge is a fantastically friendly and well organised event set in the unique grounds of West Burton Power Station in Nottinghamshire. The route takes you around the power station itself, finding yourself running under cables with ‘Warning 3,000,000 volts’ signs before heading through the village of Sturton Le Steeple through roads, trails then back to the power station by the River Trent to complete an anti-clockwise route.

It’s a relatively uncompetitive event, focused more around fundraising for local charities and encouraging others. The route is stunning, a unique mix of rural trails, riverside running and of course through a Power Station, something I’d never had the chance to do before. The pace wasn’t trailblazing, and as such, I managed to finish in my highest ever race position (5th). Post-race you are free to run around the grounds completely unsupervised which allowed for a great explore on the other side of the razor-wire fences.

The race was closely fought but eventually won by Laurent Kelly (unattached) in 36:58 with the first lady, Charlotte Jones of Worksop Harriers coming home in 45:06. I was the only Strider, finishing in 38:46. 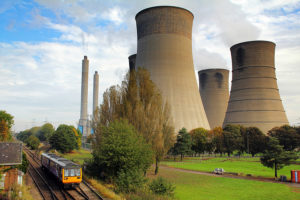 The event organisers are being incredibly coy with any official photographs from the race, so here’s a stock photo of West Burton power station, the scene of the race.