I made a last minute decision to run this event and by that I mean I booked the next to last place on the Monday, with the race due to take place Saturday 27th October.

I turned up for the registration and brief with plenty of time to spare. It was dry but very cold. The race was due to start at 6pm and it was a 6-hour endurance race running from the North side of the Humber Bridge to the South side, round a cone 2 miles along and back again.

We set off bang on 6pm, up a bit of an incline underneath the actual bridge and exiting on the opposite side, ready to run the length of the Humber Bridge. No music was allowed at this event either. The run from the North side was rather pleasant and everyone was in really high spirits. A lot of people were doing the event were doing it by walking the 6 hours: the choice was optional.

When I arrived at the cone I didn’t actually realise how much of an incline the Humber Bridge actually had!!! Off I set running back the way I’d just come, wishing other competitors good luck as we passed by each other. At the other end it was back down the incline and around another cone, remembering to check in and grab a sweet before heading out again along the same route.

By time I got to my 5th lap I was mentally fatigued: you can only have so many conversations in your head with yourself and whilst running out was OK, once around the cone it was a case of walking up that steady incline and then resuming a run/jog pace. Up till now the weather had been playing nicely but at mile 23-ish it was starting to rain and be quite windy. The cold blowing off the Humber estuary was the worst. I arrived back at check in and checked out again, walking up the incline before running what was going to be my last lap, again at the other end and round the cone. I walked only this last lap: I didn’t set off running again until I was 3 quarters of the way along the bridge. The night had suddenly got very cold, I couldn’t feel my hands any more. The rest off me was like toast even though I was running in shorts.

Down the last bit of the walking incline I ran and round the cone to the check in/out tent, and it’s here that I checked out at 11.41pm. I had completed 7 laps and run 28 miles. The experience was a fantastic way to see if I liked myself and my own company whilst running the same route over and over again and yes I found it ok so I’m now looking at the 24-hour endurance race in August next year.

It’s a fantastic well organised and extremely friendly atmosphere and a fantastic evening out.

[Race results weren’t available at the time of posting] 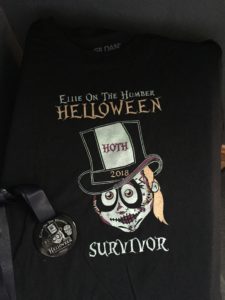