My experience of half marathons is very slim, you’re more likely to find me at a fell race but I entered this just for the medal. The start was pretty congested with 10k and half marathon runners running the first 2.5 miles together. Although, worse than the congestion was a line of cones down the middle of the road during the first couple of miles. You could run on both sides of the cones and I unfortunately found myself in the middle, slaloming from either side. I asked another runner why they were there and they pointed out that it was because people would be running back in the opposite direction, another annoyance of the 10k and half sharing the same route and time slot. Thankfully the two races soon split off with the 10kers turning right and half marathoners left onto country lanes. These mostly consisted of a gradual incline however nothing in comparison to what Sheffield has to offer. There was a section where we ran along a stretch of road just to do a hairpin bend and run back again. I personally hate when routes do this, it’s just adding on distance because they can’t find any better alternative. Not only did it cause us to lose momentum but several runners were slipping because of the tight bend and wet ground. By mile 7 the vast majority of the climb was over and it was more or less downhill to the finish. We ran back into Warrington, retracing the beginning of the route then taking a detour to the rugby stadium where we ran along one side of the pitch and back out. After this we headed back into the centre of Warrington to the finish at the golden gates of the town hall. The very last section snaked through the town’s streets and every turn we made I kept expecting to see the gates around the corner. Eventually they were there and I crossed the finish line more or less bang on my 1:45 target.

It’s probably not a race I’ll run again, however I’m glad I did it and I most definitely wouldn’t want to put anyone off. The support along the route was good, even in drizzly wet conditions, and the overall organisation was nice with a little race village, free car parking and a well organised bag drop. Oh, and of course a fancy medal!

Note from Ang: The results link currently only returns individual runner details or all runners in alphabetical order so I have not included the winners in the report.  Here is the link to the full results in case you want to look! 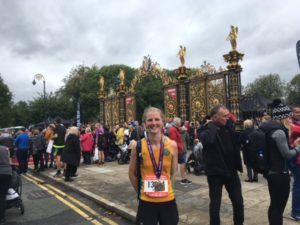