We had a hill session scheduled for this Tuesday so instead of running up and down Norfolk Park there was an away day to Taddington in the Peak District. There is about 120m of climb in it’s four miles, most of it in the first mile with Sam Brown finding out that the bloke who is top of the hill first isn’t always the winner as Caroline Brock, far more experienced at this sort of thing, sorted the ladies out again finishing in 12th position overall out of 125 finishers. 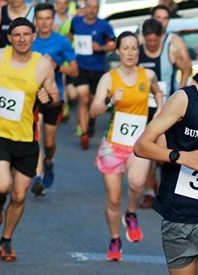 Strider’s glamour girl of the fells Caroline Brock leaving most of the men in her wake yet again. Note the cardboard race numbers the size of a cornflakes packet. Just like olden times.

The race starts from the 1920’s Bramwell Institute running up the main street passing the Queens Arms with the locals outside waving tankards of ale at the runners like drunken Lorelei. The route then turns south as it climbs steeply out of the village. Once on Taddington Moor it turns east along farm tracks before rejoining the tarmac and descending to the village once more. But beware as there’s a trick for, instead of returning direct to the Institute, another kilometer is added with a spiteful incline up an alleyway behind the houses to the top of the vilage again allowing those feeling competitive to finish with a flourish running downhill past the pub once more with the locals now on their next pint.

As the results illustrate, this race is heavily influence by Buxton AC from only 5 miles down the road with their athletes taking the first seven places. First man Luke Beresofrd ran 22:43 Eight Striders took part although one of them, as it was nearly a fell race, was running for his first claim club. 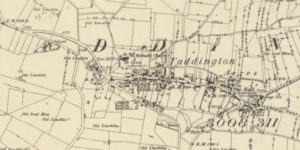 Taddington in the middle of the 19th Century with what is now the A6 running right through the village. We can see the Star Inn and the George Inn, which would have been coaching inns, numerous “old lime kilns” for burning limestone to create fertilizer plus “old lead mines”; the fortunes of mining varied with the price of the metal. To the north east we can see narrow fields, a reminder of medieval strip farming on large communal fields now fossilized in the landscape. To the south is Taddington Moor, where the race went, with its large rectangular fields. It the middle ages this was communal grazing but was cut up into individual fields in the 18th and 19th centuries. The race finished with a dirty trick going up the aptly named Hades Lane which parallels the main street, perhaps a remnant of medieval villages where crofters had a house which faced the main street and a smallholding behind. Intriguingly, look at the sub-circular wall surrounding the church. When Christianity arrived in Britain it often took over existing pagan sites so, speculatively, was this perhaps a stone circle or similar monument from prehistoric times? The church itself, although later mutilated by the Victorians, dates from the 14th Century and could be worth a visit.