Shakespeare’s cautionary words from Romeo and Juliet serve as a reminder that hot weather affects us. When temperatures soar, our reasoning and rationale can be disturbed. It can often lead to unruly and reckless behaviour.

Unfortunately it can also affect our running. The London Marathon 2018 was officially the hottest one on record and tales of the day will surely be centred on the seemingly scorching weather.

Those of you that know me, know that I very often run with little or no plan. Two years ago, I ran London as my first ever marathon. My primary aim was to finish and I had little plan other than that. Two years down the road and four marathons later, I had reduced my time to 3.01. Of course, my plan this time was to run the distance under three hours. In all honesty, even without the weather, I wasn’t confident that I was able to achieve this.  And, as I stood around at the championship start line in the blistering morning heat with not a cloud in the sky, a friend of mine (who is also a very experienced marathon runner) said to me ‘You need to be in a 2.55 shape to run sub 3 today’. I felt a mixture of despondency and acceptance to this. Yes, it probably wouldn’t be the day for a P.B but should that mean that I abandon my plan before I had even begun?

Again, to those of you that are familiar with my race day tendencies, even if I do have a notional plan, I am even worse at executing it. So as unruly and recklessly as is in keeping with tradition, I pelted off at a 6.30mm pace in full knowledge that that could not be sustained on a good day, never mind on the hottest London marathon to date.

It was immediately apparent that the route would be even busier than usual with support from the crowds. The first 10k passed by happily enough. I knew I was running far too quickly and I was aware pretty much from the first mile that I would not be able to sustain it. The voice of Pete Brown came into my head and I knew what he would say and how he would immediately tell me to slow down. Unfortunately, at that point, the crowds were far louder than that imaginary voice in my head, so I carried on regardless.

Running through Cutty Sark is one of the absolute highlights of the race. The scenery is spectacular and the atmosphere is electric. I think it’s difficult for anyone not to be pushed on by the crowds at this point. Despite the fact that I was beginning to slow and was struggling more so than ever at such an early point in a marathon, the crowds managed to lift my spirits.

As with any marathon, in between the highs are the desperate lows. By mile 8 and 9, the very notion of running close to sub 3 had evaporated. I often feel that my ‘trump card’ in running is my endurance and yet I had never felt more worn out and drained and this was still only the first half! 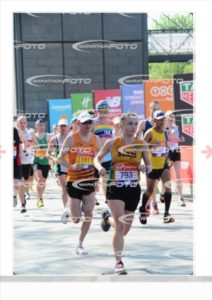 Spirts were once again boosted at the mid-way point. There are times in the London marathon when it’s impossible not to feel sheer joy. Running through Tower Bridge through what can only be described as a chamber of noise is exhilarating and I felt lucky to be part of such an event. I was also encouraged by the fact that I had ran the first half in 1.28 which was a bit less than what I had ran the first half of Berlin in.

The next few miles got depressingly slower. The heat was aggressive, runners were all grappling for shaded spots on the roads and people were desperately trying to keep themselves hydrated. The small bit of optimism that I had felt at half way evaporated more quickly than the water I was repeatedly throwing over my head.   There was little respite from the blazing sun; the route was very exposed and there was not a cloud in the sky for my entire race. It became very apparent that the heat was taking its toll on many runners and the latter stages of the second half were punctuated by runners abruptly stopping and many slowing.

At around mile 21, I knew that not only was I not going to run a sub 3, but that I also wasn’t going to run a PB. ‘What does it matter?’ I thought to myself? ‘You can slow and run a 3.15 and it really makes little odds’. This is an interesting insight into the psyche of the long distance runner and something that I have seen amongst manner of the strong runners in our club. I like to think that even when our chips are down, and the PBs are long gone, there is a drive and a determination to dig deep and to keep pushing until the very end. At some point approaching embankment as you go under the bridge, I couldn’t help thinking about what Atticus from To Kill A Mockingbird says about courage. He says that ‘real courage’ is ‘when you know you’re licked before you begin but you begin anyway and see it through no matter what’. This probably applies to most of us that ran that morning. PBs were difficult to chase, and even clinging on was a killer. Battling on in that heat and reaching that finishing line was a challenge and I like to think that each of us are proud of what we accomplished even if it wasn’t what we had hoped for.

Contemplating morale boosting literature at mile 22 indicates that I was clearly finding ways to console myself and accept the outcomes of the day. However, all of a sudden, in my 22 mile marathon delirium, a glimmer of glory appeared. ‘What is that? Is that a 3 hour pacer?’ Indeed it was.  Like a beacon of hope, I sprinted past him and thought to myself that it could be vaguely possible that all of the clocks I had seen had been wrong. My watch had been wrong. They were all wrong. If I just got past this 3 hour pacer, then the dream of a sub 3 hour marathon would be within my grasp. Such thoughts of utter desperation vanished as quickly as they arose: I did pass him and he was clearly somebody suffering with the heat too. I effectively ran past a 3-hour pacer who was going to struggle to get himself to the finish close to three hours let alone anybody else!

The final miles passed easily enough and in keeping with my marathon tradition, I sprinted for the finishing line. Sadly, Jennifer Rich wasn’t there to chase so it didn’t quite have the same thrill as last time. Looking up at the clock, it told me 3.04 and I ran desperately to get under 3.05.

Slumped at the side of the Mall, I was handed my baggage and sat in the sunshine. Happily, I bumped into Mark Havenhand and a friend of his. They immediately began to despair of the heat and tried to console me by saying that they were both very much off their target times too.
In all honesty, I didn’t really need consoling. I’d ran and enjoyed myself. Unruly and recklessly? Most definitely. But I would certainly do it all again.

32 Striders finished on this count, you’re all heroes. Well done.