I had a strange feeling when I arrived at Gilberdyke Memorial Hall for the start of the 10-mile race. Normal marshals directing you into a field. Normal registration at trestle tables in a community centre. Normal queue for the bogs, stand selling running gear, inflatable finish arch. But something was missing. Then it dawned on me: no Striders anywhere! I felt suddenly exposed and alone, before realising that if there really were no Striders, I’d be the club’s fastest finisher as well as getting a 10-mile-race PB – this being my first 10-mile race.

The course is mostly a big rectangle with a little stick on at the start/finish. It runs along closed-to-traffic country lanes, mostly between arable fields and briefly alongside the Ouse opposite Blacktoft Sands bird reserve. It’s extremely flat. According to Strava, there’s only 15m of climbing across the whole 10 miles, and most of that is probably the out and back trip over a railway bridge. It’s well organised and enthusiastically marshalled, with a handful of spectators and three water stations. There’s a free cuppa and flapjack at the end, a technical t-shirt and 48 prizes for a field of less than 500. All of which makes it sound – very unfairly – a bit dull, as flat things often do.

I’d turned up with no great expectations, having been struggling increasingly with my breathing for several weeks and more relevantly having been at a beer festival in Abbeydale Brewery the night before. I thought if I could get under 90 minutes I’d be satisfied. I put my Garmin on more for distance-tracking than anything else, and set off at a steady pace from near the back of the pack. Accidental masterstroke, as doing some overtaking in the first kilometre gave me a massive undeserved morale boost and I decided to try to kick out a bit. I knew there weren’t any hills, so the breathing ought to be manageable, and I hadn’t quite grasped the difference between 10k and 10 miles. The promised headwind between 2 and 5 miles turned out to be a light breeze, and the brief rain shower half way round was welcome. The field was small enough to be spread out quite a lot, so it was possible to pace off people a fair way ahead and try to gradually reel them in.

About 11k in I realised that there was quite a long way to go still. I was feeling ok though and was buoyed up by the politest spectators in history: two elderly ladies in deckchairs asked us whether we didn’t mind them watching us. Before long it was back over the bridge and my usual plod-finish. I came in at an average 4:45/km pace, which is a fair bit faster than I thought I could run at the moment. Just sometimes the right race is a handy way to remind yourself you’re not in as bad form as you think, and for that reason I’m really glad I got up and did this one.

All in all, this is a race worth doing if you’re stepping up your training towards an autumn half and want something a bit longer than 10k, or if you want to get a fast time, or if you’re just a bit fed up of hills! It’s only an hour’s drive from Sheffield – less if you live on the motorway side of town

431 runners finished the race, which was won by Steve Bateson of East Hull Harriers in 53:24. First female was Becky Briggs from City of Hull AC, in 59:14.

Full results can be found at: http://www.sportstimingsolutions.co.uk/rd.php?id=268 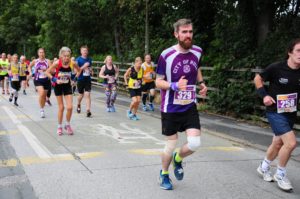