This is a very low-key and nearly very well-organised event and as a Harrogate runner described it, ‘the softest BL he could find for his 3Peaks qualification’.

I first heard about this race a few years ago from Adrian Mosses and Paul Stuart’s rave reviews, but had missed out on doing it through, football incompetence or working. Anyway this was the year I was going to get the chance, no football to distract me, a little bit of getting out of a social walk with the family and friends sorted, what could go wrong!

Cue Friday night, post-work drink, fish and chips and a bit more to drink and eat, then at 01:05 the first of two phone calls to wake me, the first a mistaken call from work and the second a disturbing wrong number from a frail sounding old gentleman. I’m up at 07:00 still knackered, taking the car to the garage, but still I am the man who can run on a mere snip of sleep, so I go back to bed and don’t care if I miss the race. 20 mins later after giving myself a bloody good talking to, I revert to my old fall back plan of getting some Costa on the way to the start, after the normal pre-race weight reduction necessities. (The beer and chips making me top a manly 16st again.) What more could go wrong?

The great Costa conspiracy: first the Bradway petrol station’s Costa is squiring milk all over the floor as I walk in, so I dash off to Dronfield Woodhouse desperate for my caffeine, only for their petrol station’s manager to decide to give his Costa a bloody deep clean. Panic struck I pick up a Pepsi Max as a very poor and inappropriate substitute.

Finally I get to Holmesfield Church to park up and meet fellow Striders Ben, Dan and Mick plus a few other normal suspects. There was certainly a different feel to the race as numbers are low but very friendly. They are insisting on full kit check before even been able to fill out an entry form. Luckily I had picked up a full OS map before I left home. The first thing you are given though, before your number, is a map of the route, making the map check 30 secs before a bit irrelevant.

Anyway, with the small crowd, the queue for the loo was also small for my last chance to get rid of the Friday-night excesses.

We start at the same spot as the round Dronfield relay, though all four striders are caught out chatting at the back when we are off and I am struggling at the back of the pack, really regretting, getting out of bed and the Pepsi Max.

As for the route, it is a lot more trail than fell, with the first 5 miles or so on new paths (to me) around the back of Holmesfield and through Cordwell valley, with the ups all runnable for the fit. I’m still taking my time and am joined by Dan, with Mick and Ben long out of sight. When we finally get up onto the tops, Dan started to used me as a wind shield, due to the end of the storm making it a blustery day. We continue on the flattish top, over towards Big Moor, still on paths I have not been on before (which was when I actually starting to realise how much I was enjoying myself) so I decided I had had enough of being a human wind shield and left Dan somewhere around Baslow Road.

The route now misses off White Edge and stays on the North-eastern side of Big Moor, gradually rising. I am constantly picking off other runners, in the rather sparse field. Then over the road onto Totley Moor and paths I am familiar with, overtaking a couple more faces I recognise and down past the old Dyson brick works to the Totley bus terminus, where we are supposed to follow the Sheffield Way route down through the woods all the way to the scout hut at the back of the Shepley Spitfire. There is no marshal for the first time and I stop my Harrogate friend from going the wrong way. Up to now, there had been no real chance of going wrong with plenty of marshals and tape, but with only one marshal at the scout hut and sporadic tape, route finding was a bit problematic, though not for me as this is my back yard. In fact I am running an official fell race less than a mile from my house. (I expect its value will have risen on that news alone.) So after a long downhill and an expectation of a 12.4m race, the last sting in the tail was tough, I only saw two runners from Totley terminus to the end, overtaking Harrogate chap soon after the terminus and another on the hobble in at the end.

Well I had finished my longest race since a leisurely 3 Cakes classic in June and my first run of over 10 miles since early July. Mick and Ben were waiting and we waited for Dan, who came in a few minutess after me. We then waited for another Strider, but gave up for a cup of tea and cake. Still not sure if there was another Strider as no club names appear on the results. [Editor’s note: it was David Adams.]

The race was bloody brilliant: new route, in mainly a different area to any other races, not overly challenging for the sake of it, under a £1 a mile to enter and a certificate, to go with my 100m swimming cert.

There were 69 runners, and the race was won by a Richard Robinson in 1:34 and Eleanor Lunt 1:53. Mick Timms led the Striders home,

(Dan and Ben’s numbers are mixed up in the official results.)

Full results can be found at: https://gobigmoor.co.uk/entry-list/ 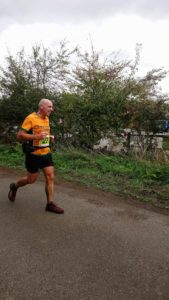